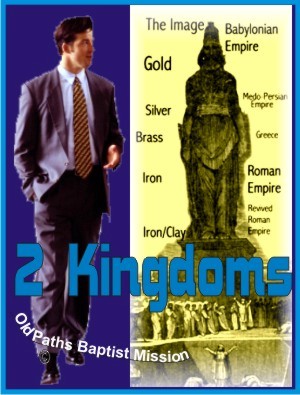 The primary theme of the Bible is one of kingdoms and kings.

In fact, two books are named KINGS: I Kings and II Kings. Kingdoms and Kings! Two more books that chronicle kingdoms and kings (in particular the Jewish kingdoms and their kings) are 1 Chronicles and 2 Chronicles.

In Matthew 4:8, we see a strange scene … six thousand years in a moment of time, with all “the kingdoms of the world” being offered by the god of this world (Satan) to the SON of GOD, Jesus Christ. “Again, the devil taketh him up into an exceeding high mountain, and sheweth him all the kingdoms of the world, and the glory of them.”

These kingdoms are collectively called by God in Daniel 4:17 “the kingdom of men.”

Furthermore, there are more references in the Scripture of the singular form of “the Kingdom” than there are of those concerning the topic of salvation in Jesus Christ. And again, the subject of “the Kingdom” in the Bible far outnumber the references it makes to Heaven or to Hell, or even to that which is made of the first coming of Jesus Christ. More than any other subject in the Bible, the subject of the KINGDOM comes up.

Careful and “believing” Bible study will take you by the logic of faith to this understanding.

Two Things Different Are Not The Same

These unbelieving scholars are confused and blind. (Do not get me wrong. I did not say, they are not Christians! I just said that they do not believe the Book.) They have misunderstood the Scripture to their hurt, and to the hurt of those who have followed them. This is where the Roman Catholic is. This is where the Presbyterian is, including most professing Christians. Christendom (whatever that means) can make no differentiation in these terms because of heart trouble.

This is why the Roman Catholic Church, and all the Protestant denominations that came out of the Reformation, have usurped the Bible. They see no place for Israel as a nation now, and they see no place for Israel in the future. They think the literal nation of Israel does not figure in any Kingdom of Heaven. They think “the Church” has inherited all the promises given to Israel, (so-called Covenant Theology). They have become thieves! These people see no future literal, physical, Messianic kingdom to be established in “the holy mountain” of Jerusalem. They willingly are fooled!!! “Thus saith the Lord; I am returned unto Zion, and will dwell in the midst of Jerusalem: and Jerusalem shall be called a city of truth; and the mountain of the Lord of hosts the holy mountain.” [Zechariah 8:3]

This also, impart, explains the hostility we see in the world today toward the Jew (Israel), and why the jealousy of the Church of Rome toward Israel. The center of the Earth is not Rome. The center of the Earth is Jerusalem! And Jerusalem belongs to the Jews! Amen! And it soon will belong to the King of Kings!!! For Jesus Christ will reign in Israel in the Kingdom of Heaven. The Post-Millennial viewpoint (including the Amillenial viewpoint) erroneously spiritualizes, and steals the promises for themselves, promises that God gave only to Israel. It behooves us then, as believers of God’s word, to see that two things different are not the same.


Next: The Kingdom Of Heaven