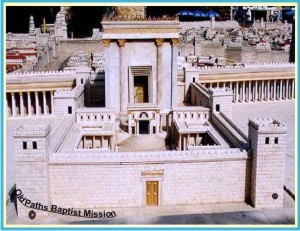 Friend, the time is at hand: “even to the time of the end.” Just turn to the book of Jeremiah in chapter 30. Look at verse seven: “Alas! for that day is great, so that none is like it: it is even the time of Jacob's trouble, but he shall be saved out of it.”

These believers in “Jacobs Trial” will need to “endure unto the end” to be saved. See Matthew 24:13. God commanded Moses to build the tabernacle (or temple) in the wilderness according to “the pattern”.

“According to all that I shew thee, after the pattern of the tabernacle, and the pattern of all the instruments thereof, even so shall ye make it.” [Exodus 25:9]

Now this wasn’t the first time that the command to “rear an altar unto the Lord” for a sacrifice at this location occurred. This also was the very exact “place” where Abraham was to offer up his only son to God, Issac.

“And it came to pass after these things, that God did tempt Abraham, and said unto him, Abraham: and he said, Behold, here I am. And he said, Take now thy son, thine only son Isaac, whom thou lovest, and get thee into the land of Moriah; and offer him there for a burnt offering upon one of the mountains which I will tell thee of. And they came to the place which God had told him of; and Abraham built an altar there, and laid the wood in order, and bound Isaac his son, and laid him on the altar upon the wood.” [Genesis 22:1-2, 9]

“And it came to pass in the four hundred and eightieth year after the children of Israel were come out of the land of Egypt, in the fourth year of Solomon's reign over Israel, in the month Zif, which is the second month, that he began to build the house of the Lord.” “But will God indeed dwell on the earth? behold, the heaven and heaven of heavens cannot contain thee; how much less this house that I have builded?" [1 Kings 8:1] Heaven is his throne and the Earth is his footstool! “It is he that sitteth upon the circle of the earth …” (Isaiah 40:22a). Great is the LORD!

This brings to my remembrance of years ago, in a church with a congregation of one thousand believers, singing Psalm 48 verses 1 and 2: “Great is the LORD, greatly to be praised in the city of our God, in the mountain of his holiness. Beautiful for situation, the joy of the whole earth, is mount Zion, on the sides of the north, the city of the great King.”

Just go through first and second Chronicles, or Kings, read the book of Isaiah, and the book of Jeremiah, and see how all went wrong, and how it brought God’s judgment with the ensuing destruction of the temple that Solomon built. Now look at that. Isn’t this just like us? I mean in our flesh … we are all just alike. We’d be like the nation of Israel and make a mess of something that was given to us that had a perfect pattern … in the perfect time … and in the perfect place!

After the destruction of Jerusalem and the temple in B.C. 588, the land of Israel was to “lay desolate” for seventy years as a Sabbath or rest because the people had rejected his word brought by his messengers. “To fulfil the word of the Lord by the mouth of Jeremiah, until the land had enjoyed her sabbaths: for as long as she lay desolate she kept sabbath, to fulfil threescore and ten years” [II Chronicles 36:21]

“Moreover all the chief of the priests, and the people, transgressed very much after all the abominations of the heathen; and polluted the house of the Lord which he had hallowed in Jerusalem. And the Lord God of their fathers sent to them by his messengers, rising up betimes, and sending; because he had compassion on his people, and on his dwelling place: But they mocked the messengers of God, and despised his words, and misused his prophets, until the wrath of the Lord arose against his people, till there was no remedy.” [II Chronicles 36:14-16].