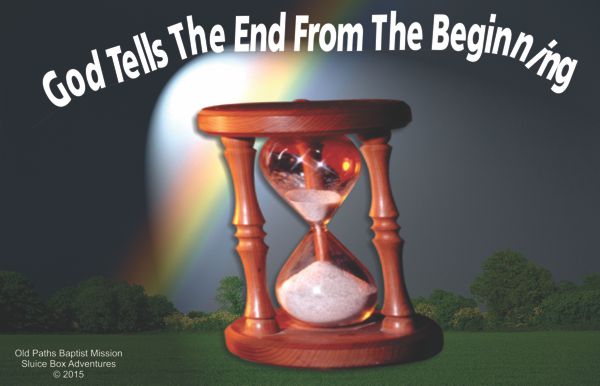 The first twenty-three years of my life I have counted as wasted, without God and without hope in this world. I joined the United States Navy in January, 1971. I was to find out how far downward I could go.

These were to be the latter years of our nation's conflict in Vietnam. The moral decay of the 1960’s was bearing its fruit --- the wrong fruit. My philosophy of life was embodied in the self-centered search for "love, happiness, and the meaning of life."

I hated all the traditions and the heritage of our nation (including God, family, and marriage).

I had an idealistic notion that man could somehow rise above war among nations and all human suffering could be eliminated.

I believed that somehow a new age was coming (without any need for God), that man was on the edge of making it by himself.

I was an agnostic and a remote follower of Nostradamus.

I was an adherent of the "New Age" before there was a "New Age" movement.

I was a product of America’s public school system.

Now for my premise:

John Dewey was that atheistic, immoral evolutionist who can rightly be charged to have destroyed our educational system by excluding the God of our A.V. 1611 Bible.

It was John Dewey who taught that children should be critical of custom and authority. The man believed in "situation ethics," claiming that the morality of an action depends on the situation and not on the application of a law.

For John Dewey, there would be no absolutes (just relativity). What's more, he interpreted moral judgments as being dependent on values and evaluation, hence on a value theory.
Hello out there!

Have you ever heard of Values Clarification?

Old John Dewey was steeped in "HEDONISM," believing that only pleasure is good as an end.

Here is the creed John Dewey had for America's public schools:

1. The greatest happiness of the greatest number is the test of right and wrong.
2. One ought to do that act of all those available in the circumstances that would produce the most good.
3. The ultimate end is the full development or perfection of the self.
4. Moral principles cannot be proved.
5. There are no moral truths.
6. Morality has no rational basis.
7. The difference between right and wrong is merely a matter of taste or convention.
8. There is no one correct moral code for all times and peoples.

In the message that follows, I have assumed several things:

2. This BIBLE is the most accurate history book ever written, and supersedes all other accounts.

For instance, the earth is round, not flat as the “flat-earth” scientists believed, when the BIBLE had already plainly told them, nearly two thousand years before the scientists woke up to the fact. “It is he that sitteth upon the circle of the earth, and the inhabitants thereof are as grasshoppers; that stretcheth out the heavens as a curtain, and spreadeth them out as a tent to dwell in:” [Isaiah 40:22].

Therefore, the BIBLE is 100% accurate in scientific matters.

4. The Genesis record is a literal, 100% accurate history, and shows us that the present earth is less than 6,000 years old.

5. The timeline of history consists of seven thousand years of time - from Genesis 1:2 to Revelation 21:1.

6. Jesus Christ is God. [1 Timothy 3:16] “And without controversy great is the mystery of godliness: God was manifest in the flesh, justified in the Spirit, seen of angels, preached unto the Gentiles, believed on in the world, received up into glory.”

7. Jesus Christ wants you to get saved. [2 Peter 3:9]: “The Lord is not slack concerning his promise, as some men count slackness; but is longsuffering to us-ward, not willing that any should perish, but that all should come to repentance.”

God Tells the End From the Beginning

Man is innately subconscious of the element of time. Yea, man is driven by it!

We are both bound to time and constrained by time.

We had a beginning in time [birth], and in time our end [death] is sure.

I can remember a time, when, as a child, I played outside as if there was no end of time to play. As I grew and grew, I began to sense that time was closing in on me. I began to be aware that there were things in life that I wanted to do, and things I wanted to accomplish. I wanted to love and to marry that right girl, and have that good job, and to attain to the prosperity that I saw all around me. It was the siren call I wanted to obey.

The America of the 1950’s, as seen from my eyes, seemed perfectly light-hearted, and totally given to the philosophy of me … me … me, which at the time satisfied me. As a young man [you could say] I was totally consumed with the pursuit of my own happiness, completely oblivious of God.

It wasn’t until I was in the United States Navy during the Vietnam War, that I felt that time was becoming an enemy to me.

Time was subtly, and even doggedly, hunting me down to move me to my final end date … to my very demise.

[The consciousness of my mortality was settling into me.]

Something, or someone, was bothering me in the year [time] of 1973.

In the process of time, the thoughts of my mortality were moving me to question the purpose of my life. Why am I here?

Am I here only to enjoy eating and drinking and making merry, and then I die? Is this all life is about?

[Ecclesiastes 2:24]: “There is nothing better for a man, than that he should eat and drink, and that he should make his soul enjoy good in his labour. This also I saw, that it was from the hand of God.”

[Isaiah 22:13]: “And behold joy and gladness, slaying oxen, and killing sheep, eating flesh, and drinking wine: let us eat and drink; for to morrow we shall die.”

It was God moving me inside my heart by reproving me of sin and righteousness. “And when he is come, he will reprove the world of sin, and of righteousness, and of judgment:” [John 16:8].

God sent one of his very choicest witnesses to me [in early 1973 while I was on board the U.S.S. Enterprise] by way of a young, “saved” [born-again] sailor by the name of George Williamson.

George [in retrospection] was sent by God as an ambassador to plead with me to be reconciled to God.

“Now then we are ambassadors for Christ, as though God did beseech you by us: we pray you in Christ's stead, be ye reconciled to God.” [2 Corinthians 5:20]

Now let me tell you this concerning George Williamson. George possessed this crystal-clear, pure testimony [a testimony of a New Testament believer in Jesus Christ], whose persistent witness of the Gospel of Jesus Christ to me became the very instrument that God used to draw me to Jesus Christ in a time of purpose.

Every person under the face of Heaven is intended in God’s design to have a time of purpose in the process of time. Have you, my friend, found the time of your purpose?