The New England Primer’s influence was felt for nearly three hundred years in America ... along with the Authorized Version of 1611 (King James Bible). 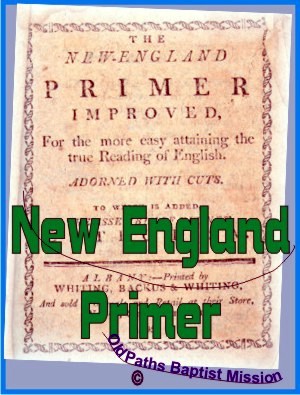 The New England Primer’s influence was felt for nearly three hundred years in America ... along with the Authorized Version of 1611 (King James Bible).

The New England Primer was a textbook used by students in New England and in other English settlements in North America. It was first printed in Boston in 1690 by Benjamin Harris who had published a similar volume in London. It was used by students into the 19th century. Over five million copies of the book were sold. In the 1700's schools in the colonies were strongly influenced by religion.

It was the intent of the colonists that all children should learn to read and in 1642 Puritan Massachusetts passed a law stating this. They believed that an inability to read was Satan's attempt to keep people from the Scriptures. The New England Primer followed a tradition of combining the study of the alphabet with Bible reading. It introduced each alphabet letter in a religious phrase and then illustrated the phrase with a woodcut. The primer also contained a catechism of religious questions and answers. Emphasis was placed on fear of sin, God's punishment and the fact that all people would have to face death. Here are some examples of alphabet rhymes that teach moral values as well as reading.

Next: Biographies of Baptized Believers