All About Old Paths Practice -The Christian's Clothes Are Different

There is a gender demarcation to be maintained between MALE and FEMALE clothing.

The Christian's Clothes Are Different 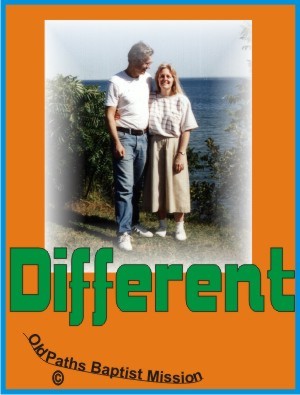 There is a gender demarcation to be maintained between MALE and FEMALE clothing. Amen!

In my message, The Most Beautiful Woman, I gave mention of a hero of the modern feminist movement. This hero was Mary Edwards Walker, and she was only 16 years old (in 1848) when she began to discard her skirts for the full trousers of men in order to promote "women's rights." "She wore her hair in curls, in order,” so she said, “that everybody would know that I was a woman." She never did get married.

Later in her life (in 1897), she founded a colony for women called "Adamless Eden", and wrote a book called Unmasked, or the Science Of Immorality.

Now … who do you suppose should wear the britches around here?

PANT’S … are an article of clothing DESIGNED by God, and INTENDED by God to be WORN by men in WORSHIP before God (as the priests in the tabernacle in the wilderness).

In 1 Timothy 2:1-10 the Apostle Paul, by the Holy Ghost, instructs how the men and women are to worship God. Verse nine begins with: “In like manner …”, and is instructing the women, how part of their worship of God is by what clothes they wear.

“In like manner also, that women adorn themselves in modest apparel, with shamefacedness and sobriety; not with broided hair, or gold, or pearls, or costly array.”

Furthermore, (after Adam sinned), Adam contrived his own notion of what it was to be covered, but God had a different opinion. His covering for both the man and woman was to be a covering that covered everything down from the neck to below the knees!

You say prove it, Brother St.James! Now just settle you down, my friend. See the booklet called: Cross-dressing By The Light Of Your Fire for the complete answer from the Bible.

Next: The Time of the Birth of Jesus Christ