Our first educational system was born out of John Cotton’s book Milk For Babes, Drawn out of The Breasts of both Testaments (1646), and in its condensed form, became the New England Primer which is how many earlier generations of Americans migrating west learned their ABC’s.

The Foundation Was Established ... In Education 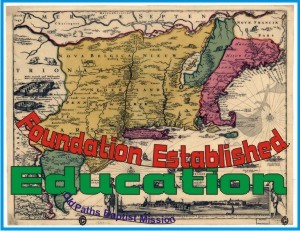 Our first educational system was born out of John Cotton's book: Milk For Babes, Drawn out of The Breasts of both Testaments, 1646, and in its condensed form, became the New England Primer which is how many earlier generations of Americans migrating west learned their ABC's.

"What hath God done for you?"

Answer: "God hath made me, he keepeth me, and He can save me."

Indeed … to maintain GOOD PUBLIC policy for the GOOD of America … the major underpinning of a GOOD education is to HONOR the God of the BIBLE… and to ingrain into the hearts and minds of our children a thorough knowledge of this Bible, and therefore, the God of the Bible. Benjamin Rush … a signer of our U.S. Declaration of Independence said this:

“The only foundation for a useful education in a republic is to be laid in religion. Without this, there can be no virtue, and without virtue there can be no liberty. The only means of establishing and perpetuating our republican forms of government…is the universal education of our youth in the principles of Christianity by means of the Bible; for this divine book above all others favors… respect for just laws. Without religion, I believe that learning does real mischief to the morals and principles of mankind”.

Next: The Walls of Seperation - Re-defined