It would be in America (among the Gentile nations) at the latter end of the church age where some of the greatest moving of the Holy Ghost would occur in revivals experienced by God's people. It would behoove the Bible-believing Christian to read the historical narratives recording God’s work in America.

The Foundation Was Established ... In Religion 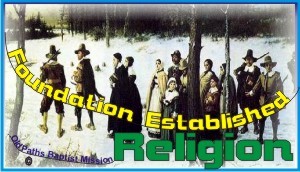 William Bradford, the Plymouth colony's first governor declared on the day of public thanksgiving in October 1621: "We have noted these things, so that you might see their worth and not negligently lose what your fathers have obtained with so much hardship."

We can, by the Mayflower's crossing of the Atlantic Ocean, see the mighty moving of the Spirit of God to encompass the earth from east to west with the Gospel of Jesus Christ. This is fulfillment of: "But ye shall receive power, after that the Holy Ghost is come upon you: and ye shall be witnesses unto me both in Jerusalem, and in all Judea, and in Samaria, and unto the uttermost part of the earth" [Acts 1:8].

In Rhode Island our nation had the perfect model for all the colonies to follow ... in both government and religion. As God would have it, this colony [its government, and its relationship with respect to the religion] would act as the primary model of an ideal government to Thomas Jefferson. The Rhode Island architect is Roger Williams. As one reads The Plea For Religious Liberty, one will see the affect the document has had on thinking of our founding fathers.

To read: A PLEA FOR RELIGIOUS LIBERTY by Roger Williams click on the link

The Gospel of Jesus Christ, as it was preached, went west in its travel to "the uttermost part of the earth" (See Acts 16: 6,9).

It would be in America (among the Gentile nations) at the latter end of the church age where some of the greatest moving of the Holy Ghost would occur in revivals experienced by God's people. It would behoove the Bible-believing Christian to read the historical narratives recording God's work in America.

In the 1730’s and 40's there was a "Great Awakening" in America. Jonathan Edwards of Northampton, Massachusetts, led the charge, reading to his congregation in his monotone voice word for word from his manuscript, Sinners in the Hands of an Angry God. It shook the place! The message had God's stamp upon it. The fires of revival spread amongst the Christians and the souls outside the churches got saved. It spread throughout New England and all over the colonies.

God brought George Whitefield at this time to further affect our forefathers with the Gospel of Jesus Christ. Tens of thousands of people would congregate in the open fields to hear the Gospel.

God also used Charles and Gilbert Tennant of Pennsylvania in an outpouring of evangelical power. It was estimated in New England alone that of a population of 250,000 people, over 50,000 souls were saved (born again) and added to the kingdom of God.

America's men, women and children turned and experienced true repentance. They "sorrowed to repentance made sorry after a godly manner" [2 Corinthians 7:9]. They received "with meekness the engrafted word" (James 1:21). Their lives were changed. The changed lives prepared and made fertile the ground, which would usher forth the Biblical principles to frame the United States of America's foundational documents, The Declaration of Independence, The U.S.Constitution, and The Bill of Rights.

God truly visited us as a nation with great blessings! Never on the face of this earth in two thousand years of history did a people experience such opportunities to worship God "in the beauties of holiness."

Can you imagine the conglomerate effect of 50,000 saved and washed by the blood, Bible thumping and believing, redeemed men, women and children out of a population of 250,000 people in New England which was the case after THE GREAT AWAKENING of the 1730's and 40's occurred?

The first phase of the Great Awakening started in 1734 with Jonathan Edwards. He was preaching a series of expositive messages to his people out of the book of 1 Corinthians chapter 13. They were powerful and cutting to the cold hearts of the people, and God's Spirit visited with a tremendous outpouring of His Grace and mercy, and souls were saved. After a few years, the revival fire was lessened in fervor.

Then, in the second phase of The Awakening, the Holy Ghost again chose to begin His work with Jonathan Edwards. In Northampton, Massachusetts, in the month of June 1741, Jonathan Edwards preached with no apparent effect to his congregation a message called, Sinners In The Hands Of An Angry God. However, the next month when he preached the same message,

"People 'yelled and shrieked, they rolled in the aisles, they crowded up into the pulpit and begged him to stop.' One observer reported, 'One waited with the deepest and most solemn solicitude to hear the trumpet sound ... And was deeply disappointed when the day terminated and left the world in its usual state of tranquillity." 14

George Whitefield, in 1746, delivered "one of his most celebrated speeches. It was a conversation with Father Abraham in which Whitefield would bellow to the sky: 'Have you any Congregationalists upon there? any Presbyterians? any Baptists?' After a pause to allow suspense to generate, Whitefield would report that father Abraham had told him, 'We know none of these names up here." 15

True New Testament salvation will produce in the heart of men the "fruit of the Spirit."

For example, it was recorded that Richard Mather was "saved by the blood of the Lamb of God" when he was eighteen years old. This wasn't just some quick profession of faith made in response to some church altar call. He got saved!

For him, "The pangs of the new birth were severe while they lasted, but 'the Lord revived his broken heart" 10

Fruit came as a result of the new birth! Then what is this fruit?  "But the fruit of the Spirit is love, joy, peace, longsuffering, gentleness, goodness, faith, meekness, temperance: against such there is no law. " (Galatians 5:22-23)

Richard Mather said: "As for bitternesse of spirit and tartnesse of contests, I have never thought that to be God’s way of promoting truth amongst brethren ... For those who must live together in the heavens, I know not why they should not love one another on earth, whatever differences or apprehensions may for the present be found amongst them in some things." 11

His son, Increase, relates this of his father: "he was exceeding low and little in his own eyes. Some have thought that his greatest error was that he did not magnifie his office, as he might and sometimes should have done." 12

Next: The Foundation Was Established ... In Education

Men refuse to learn the "lessons" afforded by the light of HISTORY:

We have disobeyed the commandment in Proverbs 22:28- "Remove not the ancient landmark which thy fathers have set."

The Departure from the BIBLE
What was the catalyst or reason for this downward spiral? Are you ready! The eyes of men everywhere had been clouded over with cataracts because of our apostasy or departure from the BIBLE … God’s word (and more exactly including the multiplicity of translations and corruption's to God's written word).
This apostasy began in America in the BIBLE SCHOOLS early in the last century (1901) when Philip Schaff (with other rank liberals who had rot-gut unbelief in God's word within their hearts) colluded with the English RV committee of 1885 (Westcott and Hort) to produce the American Standard Version (ASV), also known as "the Rock of Bible Honesty" by the scholars, or more accurately, by Bible believers, as a prime example of a new age version of a corrupted bible.