VII.  The Kingdom of Heaven

But now we, the people of the United States of America in the 21st century, have forgotten all of this!

Scripture [Hebrew 4:12] saith in the book of Exodus, chapter one, verse eight: “Now there arose up a new king over Egypt, which knew not Joseph.” [Exodus 1:8]

No longer do we believe what God said in THE BIBLE: That men are sinners [Romans 3:23] and that sinners will perform end runs around the things that are right.  We need checks and balances to restrain sin.

We … THE PEOPLE … have performed an end run around the Constitution of the United States, which formulated the protections enjoyed by us by the separation of the three branches of government [the executive, the legislative and the judicial].

We, as Americans, have done an end run around the protective system of checks and balances that were built into the United States Constitution, and have thereby, precipitated the catastrophic destruction our republic, which in the beginning [in 1787] honored the God of heaven and earth.

How or why did this happen?  We can sum it this way:

We have totally forgotten the witness of Thomas Tredwell.

And why is this so?

It is so because we have forgotten God’s words.  We put them behind us.  We did not keep them!!!

This reminds me of Josiah, a king of Israel, [who has passed on before us all] and what he said in his day by the Holy Ghost:

“Go, inquire of the LORD for me, and for them that are left in Israel and in Judah, concerning the words of the book that is found: for great is the wrath of the LORD that is poured out upon us, because our fathers have not kept the word of the LORD, to do after all that is written in this book.” [2 Chronicles] 34:21

Here is our warning: “The wicked shall be turned into hell, and all the nations that forget God.” [Psalms 9:17]

It happens to all the nations that forget God.

At this point in time in the 21st century, The United States has been “numbered” and is “finished”.  We have been “weighed” in the balances and are “found wanting.”  We are now “divided” and our government is collapsing.

Therefore, the United States of America is doomed.

The time of the Gentiles is near to the end!

Now, here is one of the more basic truths of life:  Men will have to do with WHOM they will have to do.  We will surely pay the piper!  “Neither is there any creature that is not manifest in his sight: but all things are naked and opened unto the eyes of him with whom we have to do.”  [Hebrews 4:13]

Let me move on.  The first instance of the word: “government” appears in the Bible in the book of Isaiah, chapter nine, verse six: “For unto us a child is born, unto us a son is given: and the government shall be upon his shoulder: and his name shall be called Wonderful, Counseller, The mighty God, The everlasting Father, The Prince of Peace.” [Isaiah 9:6]

God will now turn to Israel.

Ezekiel 36:8-11: “But ye, O mountains of Israel, ye shall shoot forth your branches, and yield your fruit to my people of Israel; for they are at hand to come. For, behold, I am for you, and I will turn unto you, and ye shall be tilled and sown: And I will multiply men upon you, all the house of Israel, even all of it: and the cities shall be inhabited, and the wastes shall be builded: And I will multiply upon you man and beast; and they shall increase and bring fruit: and I will settle you after your old estates, and will do better unto you than at your beginnings: and ye shall know that I am the LORD.”

This is where we will sum things up.

In the beginning of this treatise we placed before you four questions.  The answers to these four questions are now very evident:

The answer to question #1: The perfect government to preside over the affairs of men on planet earth will be a supernatural government with a supernatural king reigning over a one-thousand-year kingdom … a MONARCHY!

The answer to question #2: The answer is yes, the perfect government is certain and it will be put into place on Mount Zion in Israel!

The answer to question #3: The answer is very soon!!!    After the times of the Gentiles is over at the end of Jacob’s trouble [Jeremiah 30:7].

The answer to question #4: The answer is … we can find this perfect government now by faith by believing the words of God [where concerning prophecy].

Believe this prophecy: “And the LORD will create upon every dwelling place of mount Zion, and upon her assemblies, a cloud and smoke by day, and the shining of a flaming fire by night: for upon all the glory shall be a defence.” [Isaiah 4:5]

All the messengers of God [Haggai 1:13], all the prophets of God, and all the words of God in THE BOOK are pointing to the most important event that will occur on this earth [ever since the creation].

This event will be marked by “the presence of God” in the millennial dispensation of a GOVERNMENT established by the SON of GOD … JESUS CHRIST … when every knee shall bow to HIM, as SCRIPTURE says it will happen, which thing is located in the book Isaiah: “I have sworn by myself, the word is gone out of my mouth in righteousness, and shall not return, that unto me every knee shall bow, every tongue shall swear.” [Isaiah 45:23].

The “presence of God” will change everything.   It will be as the BOOK says it will be: “As smoke is driven away, so drive them away: as wax melteth before the fire, so let the wicked perish at the presence of God.” [Psalm 68:2]

Then all the messengers of God, all the prophets of God, and all the words of God have “cried out” [Zechariah 7:7, 13] this message of the Kingdom of Heaven to occur at the Second Advent of Jesus Christ.  In no uncertain terms, first to Israel, and then, to all the world, and men everywhere, and all of this was prophesied 400 years before the time of the First Advent of Jesus Christ.

Friend, look to the ONE WHO holds the KEY!  See HIM now in the book of the Revelation of Jesus Christ.  See it play out now by the eye of faith in chapter three, verse seven and eight:

The One who holds the key of David will be the ONE WHO runs the government.

This government will bring peace to all the earth: “In his days shall the righteous flourish; and abundance of peace so long as the moon endureth.” [Psalm 72:7]

A king of a theocratic kingdom, in a monarchy, in the lineage of King David, will cause his people “to stand to it”, [2 Chronicles 34:32].

This perfect government will one day come to this planet earth.  No doubt about it!  There is a “new” world coming … a beautiful world, and it comes only when Jesus Christ comes to this world.

In the near future, in the Millennium [one thousand years], which is identified in the Bible as the Kingdom of Heaven there will be instituted God’s “government”!

This will be a perfect government!

THIS WILL BE THE ULTIMATE GOVERNMENT!

Now, the perfect form of government to govern all mankind … is a monarchy.   A monarchy is the absolute rule by a monarch.   A monarch is a single person who has all power vested within him.

This king will be Jesus Christ.

All three branches of government: the legislative branch, the executive branch, and the judicial branch, will reside within HIM.

A monarchy formulates a perfect government only when Jesus Christ comes to be THE KING over all “the ends of the world” in the millennial Kingdom of Heaven.

History shows this only to be true.

This one-thousand-year kingdom will exhibit the most wonderful thing this earth will ever see.

Isaiah 9:7: “Of the increase of his government and peace there shall be no end, upon the throne of David, and upon his kingdom, to order it, and to establish it with judgment and with justice from henceforth even for ever. The zeal of the LORD of hosts will perform this.”

This increase will be a peace that will never end. 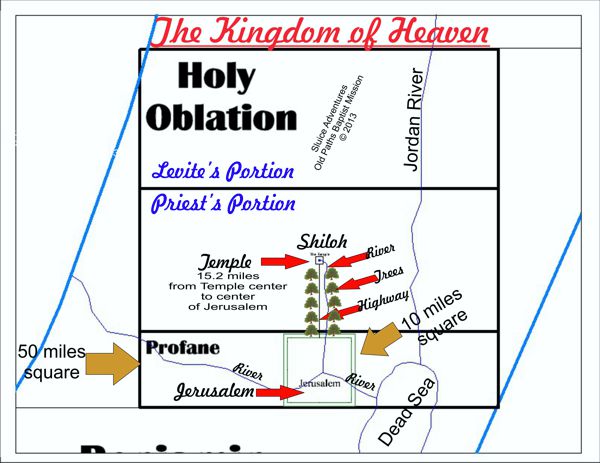 Finally!  The people will enjoy a perfect government that will bring true judgment and true justice to all the inhabitants in all four corners of the earth … in perfect peace.

“For he is our peace, who hath made both one, and hath broken down the middle wall of partition between us;” [Ephesians 2:14].

Jesus Christ will do all of this … and HE will do it without failure!

There, we have it ... the beautiful picture framed by The Holy Ghost in the BOOK HE wrote (and preserved perfectly in the Authorized Version of The Bible) in  1 Samuel, 22:1-2 ... hundreds of years before the Son Of God came into the world ... to be rejected by His own.  David … shown to be a type of Christ ... was forced to live outside the gate!  And he was made a captain over all who came to him for protection.

Flee to Jesus Christ.  Come to HIM and be hid in the cleft of the rock ... by the blood of The Lamb of God.  Amen!  “For it became him, for whom are all things, and by whom are all things, in bringing many sons unto glory, to make the captain of their salvation perfect through sufferings.” [Hebrews 2:10]

Put your trust in Jesus Christ!

Psalm 22:28: “For the kingdom is the LORD'S: and he is the governor among the nations.”