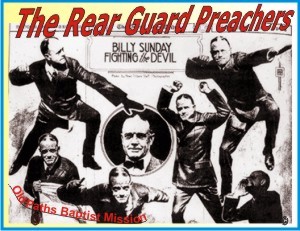 "Let's quit fiddling with religion and do something to bring the world to Christ. If you want to drive the devil out of the world, hit him with a cradle instead of a crutch."

In the last century ... The Rear Guard has now past on into history.

GOD had sent his REAR GUARD preachers to America to try to turn America back to himself.

GOD had sent men like Sam Jones to preach. D.L. Moody once said of Sam Jones: "God has put into your hands the sledge hammer with which to shatter the formalism of the church and batter down the strongholds of sin, and He is helping you mightily to use it."

GOD also sent Lorenzo Dow to preach fire and brimstone to a people growing dim in the eyes and cold in the heart.

The LORD has had a literal drove of troops. Some of them are listed here.

God's old-time preachers that stood true suffered derision and ridicule and were often threatened for their very lives.

One time in 1908 after Mordecai Ham had preached there, the streets of Asheville, North Carolina, were filled all night with crowds shouting "Hang Ham! Hang Ham!" Another time Mordecai was in San Benite, Texas, (1918) and a bunch of soldiers "seized him and started up the railroad tracks with a rope, a bucket of tar, and a sack of feathers." (Ed Reese, Christian Hall of Fame Series, Mordecai Ham, p. 10).

GOD sent his preachers to America!
America was increasingly rejecting them.

With that rejection, the Bible colleges and seminaries began turning out a different breed of preachers. Modernism, materialism and unbelief had crept in. America was turning away from the God of the Bible. History had repeated itself.

"Let's quit fiddling with religion and do something to bring the world to Christ.

If you want to drive the devil out of the world, hit him with a cradle instead of a crutch.
I'm against sin.

And when I'm old and fistless and footless and toothless, I'll gum it till I go home to Glory and it goes home to perdition!"

All About The Rear Guard Preachers - Lorenzo Dow

Dow's fire and brimstone sermon at the Methodist Church that night was interrupted by a group that had gathered to harass the evangelist.

The service was broken up by the group of "rowdies." Undaunted, Dow followed the group that harassed him as they went into a whiskey store.

He was covered with the stink of rotten eggs, but unbowed.

All About The Rear Guard Preachers - Sam Jones

Sam Jones was a drunken ex-lawyer and ex-school teacher who got converted at the age of 24 and, went on to become the greatest Methodist evangelist since the Wesley's, and one of the greatest gospel preachers of all time.

All About The Rear Guard Preachers - W.B. Riley

Riley's ministry was one of preaching the gospel as well as fighting foes of the gospel, and he was sympathetic to other evangelists engaged in this same fight, providing help and support to R.A. Torrey and Gipsy Smith.

He was chosen secretary to prepare for J. Wilbur Chapman's campaign in Minneapolis.

All About The Rear Guard Preachers - J. Frank Norris

"Because of Chipp's anger and abuse I listened to the conversation.

Everybody in the hotel was afraid of him.

I heard him call Dr. Norris mane vile names, and he was very profane.

I heard him repeat several time, "You blankety, blankety blank, I am coming over there and kill you."

All About The Rear Guard Preachers - Mordecai Ham

Crazed with liquor, they marched into his tabernacle, seized him and started up the railroad tracks with a rope, a bucket of tar, and a sack of feathers.

A detachment of cavalry from the nearest army base came to his rescue as the mayor wired Washington of the predicament.

They were three miles down the track before they were overtaken.

By all odds Peter S. should have not ever made it to where he is today, but for God’s grace!