"Man that is born of a woman is of few days, and full of trouble. He cometh forth like a flower, and is cut down: he fleeth also as a shadow, and continueth not." [Job 14:1]

The Sureness Of Trouble !!! 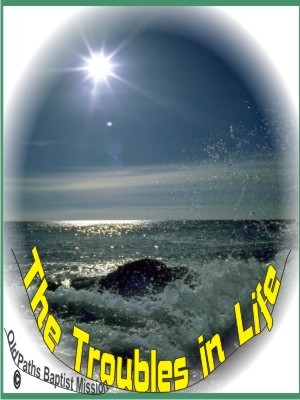 •Life is a bale full of troubles!

I have also found this very true!!!

Unknown to the world and almost completely misunderstood by religionists, or "un-believed," the following text stands as a rock in many a broken home to show forth an inexorable law with no exceptions, but for God’s grace!

The phenomenon, which so completely engulfed America in the last 40 or 50 years of broken homes and marriages (destroyed families), has resulted because of man’s hatred of God and The BOOK (A.V. 1611). In man’s depravity and sin darkened mind lays the reason for our nation plying the highway called: DESTRUCTION.

•In the heart of the believer is the Holy Spirit, indwelling in him since the day of his translation from the power of darkness into the kingdom of His dear Son.

This is "the new birth!"

The "new birth" is the most sensible and important thing that can happen to an individual, but in the eyes of the world, if that happens, that person, being guilty of receiving Jesus Christ, has entered into the ranks of the radical fringe.

You see, that husband or wife, or that son or daughter, who has by faith been justified, now has peace with God.

Jesus Christ brings that peace within the heart of a man, but on the outside (creating strife and division) separates him from his unbelieving loved-ones.

The believer must enter into the fray of spiritual war-fare, not only in the fight against his flesh, the world and the Devil, but he must even contend with his loved ones, yes they, of his own household.

This comes into action because of the bomb leveling fact of the "new man". "Therefore if any man be in Christ, he is a new creature: old things are passed away; behold, all things are become new." [2 Corinthians 5:17]

•The following pages will provide HELP and INFORMATION to those of you who have been left behind by your loved ones!

The Sureness Of Troubles In Life Primer

All About Men And Women Left Behind

As the time approaches for the translation of the saints,

Bible-believing Christian will suffer at ever-increasing rate the loss of wives, husbands and children because of divorce.

All About The Doctrine Of Divorce

This subject elicits so much trouble in the ranks of the brethren.

When reading the following, keep 1 Corinthians 10:13 in view.

God’s provision for the adopted sons of God (Galatians 4:6) in a sin-cursed world... sees for every possible eventuality and provides the divine contingency... a way of escape so that we may be able to bear it.

All About The Ruin Of Divorce

It has been NOW for several generations that DEATH is no longer THE PREDOMINATE REASON FOR STEP RELATIONSHIPS.

Now this brings us to the single most important issue that is tearing down the walls of our homes today.

DIVORCE IS THE ISSUE!

All About The Single Parent Curse

Now, we have in this country a SORRY condition, or plague, as a result of all these divorces.

The plague is called: the single parent family. This is where one parent ... alone ... tries to raise children without the other parent.

God intended from the beginning ... that it would take two to raise the children up.

All About The Great Stepper

First: The Bible is the perfect word of God.

In the English language, it is preserved in the Authorized Version of the Bible of 1611 (commonly called the King James Bible).

The Step Parent Relationship Is Less Than The Ideal!

The Step Parent/Step Child Relationship Is Biblically Based.

All About Divorced And Called To Preach

The Bible teaches in this dispensation (the church age) the doctrine of the “universal priesthood”.

“Ye also, as lively stones, are built up a spiritual house, an holy priesthood, to offer up spiritual sacrifices, acceptable to God by Jesus Christ."