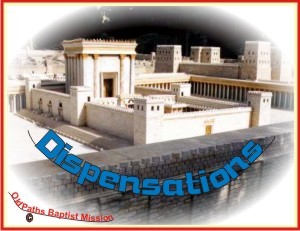 Two Things Different Are Not The Same!

•The Kingdom of God

The Kingdom of God is a KINGDOM, which is first inward, or moral (in the heart!), and is invisible [or supernatural], and is currently present in the age we live in, which is the Church age.

Jesus Christ revealed that: “The kingdom of God is within you.”

It is inward and spiritual!

•The Kingdom of Heaven

This KINGDOM in the Bible is always a visible, physical (or natural), Davidic, one thousand year kingdom on this Earth.

All About  The Timeline

It has been evil fruit!

All About The Creation Week

Who is this God who “created the heaven and the earth”? Good question! As our nation increasingly moves away from its Judeo-Christian foundation the ignorance of Bible truths prevails.

All About The Two Kingdoms

The phrase the “kingdom of God” is found seventy times including in the book of Matthew.

The two kingdoms are not the same!

All About The Kingdom of Heaven

The Bible is replete with historical (or past) events and with prophetic (or future) events, which comprise in the window of TIME God’s perspective of things he wishes to convey by revelation to man.

This literal physical earthly kingdom is of most interest to God.

This will be a literal, physical, JEWISH KINGDOM on this earth.

All About The Pattern

All About The Postponement

Israel rejected the owner of the house, whose house was meant to be “the house of prayer."

They took him, and despitefully abused him, and “cried, saying, Crucify him, crucify him."

All About The Church Age

"In this dispensation … the Church Age … the temple, “not made with hands”, is that invisible, supernatural, indwelling of the Holy Spirit in the heart of the believer in Jesus Christ.

The temple in this age is the believer!

All About The New Testament Bishop

He is a shepherd working under the chief Shepherd (Jesus Christ the Son of God).

"And when the chief Shepherd shall appear, ye shall receive a crown of glory that fadeth not away"  [1 Peter 5:4].

A bishop is the overseer in the local New Testament Baptist church.

All About The Falling Away

The churches in the main since 1900 have abandoned the faith.

The so-called Christianity of today is very traitorous to Jesus Christ!

The last true wave of revival or awakening for America was experienced when J. Frank Norris, Mordecai Ham and Billy Sunday were preaching up and down the breadth of our land.

All About The Translation

We need to comfort one another with these words (vs.18).

This is known as the blessed hope in Titus 2:13.

"That Wicked" one can not be revealed in a temple to be built in Jerusalem until we believers (the Christians) are removed from this Planet Earth!