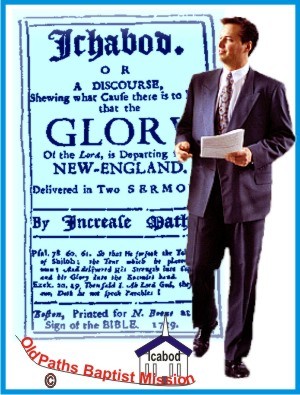 In Increase Mather's day (in the 1700's, a New England preacher), (that period of time identified as the era of the church of Philadelphia) the old stalwarts of the faith lamented over the spiritual condition of the churches in New England.

With the clarity afforded by hindsight, we can see the mighty moving of God's Spirit in the hearts and minds of the people of England, and in all the American colonies in The Great Awakening.

The falling away (or apostasy) in Increase Mather's day was only momentary, and was remedied by God's people turning to the Lord with their hearts being prepared through fasting, through prayer and the seeking for revival. "The falling away" that we see in 2 Thessalonians 2 is a reference to a final apostasy for which there will be no remedy nor national revival possible.

The era of the church of Philadelphia is gone! The kicking and fussing of the Devil has been successful in the blinding our nation. Our true heritage found in the old historical narratives, lies unread, and rejected. We would rather re-write history so that we can get rid of God. Political correctness is the order for our day. The people's rights movement serves for nothing in our land but as an excuse … to live in ungodly wickedness and in rebellion to God. We are now in the era of the church of Laodicia.

The last true wave of revival or awakening for America was experienced when J. Frank Norris, Mordecai Ham and Billy Sunday were preaching up and down the breadth of our land. Those old soldiers are now gone ... gone ... gone. The true Holy Ghost national revivals are now done ... done ... done. (The only revivals to be experienced now will occur only here and there on a local level.)

Again, in this century the churches have fallen away or rotted out from inside ... undetected ... little by little ... until all that is rotten has come into view for everyone to see. The glory of the Lord hath departed. Ichabod! "If the foundations be destroyed, what can the righteous do?" [Psalm 11:3]

They will fly away!

Next: The Rapture Of The Church