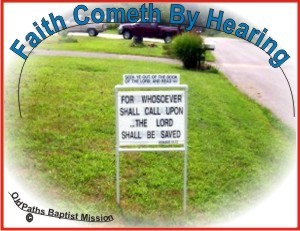 “But with whom was he grieved forty years? was it not with them that had sinned, whose carcases fell in the wilderness?  And to whom sware he that they should not enter into his rest, but to them that believed not? So we see that they could not enter in because of unbelief.” [Hebrews 3:17-19]

“For unto us was the gospel preached, as well as unto them: but the word preached did not profit them, not being mixed with faith in them that heard it.” [Hebrews 4:2]

“Now faith is the substance of things hoped for, the evidence of things not seen. But without faith it is impossible to please him: for he that cometh to God must believe that he is, and that he is a rewarder of them that diligently seek him.”[Hebrews 11:1,6]

With these declarations from the OLD BLACK BOOK, then it is for us to BELIEVE God at his word. We need to … accept as little children … that God has inspired not only some missing original autographs but that he has MAINTAINED his inspired word down through the centuries of time in spite of sinful men who sit in the high places as the scholars and as the educators.

With over 200 translations of Bible having been made since 1881, The Devil sure has caused a lot of confusion, nevertheless, THE BIBLE still remains for us to trust and obey. The Apostle Paul had cause to be thankful over the Thessalonian believers.

Several hundred years ago there was an open door set before the true Church "which is his body." In the prophetic sense, this was the church of Philadelphia. [See the book of Revelation 1-3.] Not only are these seven literal churches in Asia, they are also indicative of seven distinct and chronological periods in church history. The church of Philadelphia had an open door set before it by the Holy Ghost, which no man could shut [1600-1900].

Never was there seen such a moving of God's Spirit circling the globe of this Earth in a movement from the east to the west. Never was there such an exciting and fascinating time! Never was there so much interest by so many of God's creation concerning the proceedings going on in the world in the hearts and minds of men.

The Gospel of Jesus Christ was literally going to the four quarters of the Earth with a resounding boom! Even the Devil, old Satan himself, had more than a passing interest in these proceedings. Satan's anger over losing the souls of men by the droves to the Son of God during this Philadelphia period had caused him to kick and fuss and work even harder against his old enemy. His enemy is THE ALMIGHTY GOD of The BOOK [The A.V.1611 Bible].

Next: Hearing By The Word Of God