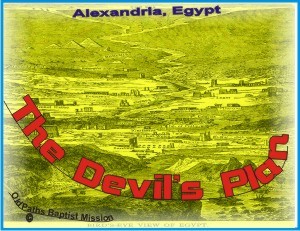 Satan has a goal. He wants to maximize as much uncertainty as possible as to just what God has said to man. “And he said unto the woman, Yea, hath God said, …” [Genesis 3:1b].

He wants to undermine your faith by planting doubt in your heart about the Bible that is in your very hands being the perfect word of God.

The Devil: The Deceiver"


He wants to use clever stratagem in talking you out of your faith in the Book, by USING the Book, yea, even QUOTING the Book itself with the smooth logic of a FOX. In the wilderness Jesus was tempted by the Devil in a piously deceptive self-serving manner.

The Devil: The Liar And The Murderer


Satan is a LIAR, and a MURDERER, because Jesus Christ himself “named” him one. John 8:44 “Ye are of your father the devil, and the lusts of your father ye will do. He was a murderer from the beginning, and abode not in the truth, because there is no truth in him. When he speaketh a lie, he speaketh of his own: for he is a liar, and the father of it.”

The Devil: The Rebel


"For thou hast said in thine heart, I will ascend into heaven, I will exalt my throne above the stars of God: I will sit also upon the mount of the congregation, in the sides of the north: I will ascend above the heights of the cloud: I will be like the most High."

Then the LORD GOD of the Bible returns the volley with a tremendous declaration "Yet thou shalt be brought down to hell, to the sides of the pit."

This was the beginning of the end for the Devil. His destination is fixed!


The Devil in his anger deceives, blinds and fools the mass of humanity into believing a lie. He wants mankind to go with him into the Lake of Fire prepared at the time of "the Great White Throne Judgment."

In 2 Corinthians 4:3,4, the Holy Ghost reveals this satanic work in the minds of men. "But if our gospel be hid, it is hid to them that are lost: In whom the god of this world hath blinded the minds of them which believe not, lest the light of the glorious gospel of Christ, who is the image of God, should shine unto them."

He does not want you to believe this old BOOK, the AV 1611 (Authorized Version of 1611) or any revision thereof. He wants to mess with the Book. He wants to nullify it with his own subtle "corrupt" versions of the Bible.

The Apostle Paul warns us in 2 Corinthians 2:17 that there are those "which corrupt the word of God". They will do anything to keep the true written revelation of God from working in the human heart. They will do anything that would dull and make murky the deity of Jesus Christ (that He is the Son of God) or sully the propounding of the Gospel of Jesus Christ. The corruption of God’s BIBLE is of great interest to Satan [1 Corinthians 15:1-4].

This corruption of God's Holy Bible has been something that has been ongoing for centuries. We should be aware of this. "Lest Satan should get an advantage of us: for we are not ignorant of his devices." [2 Corinthians 2:11]

This corruption of the "written word" of God has been a long battle and has been going on ever since the Devil went up to Eve to deceive her as to what God had said. "And he said unto the woman, Yea, hath God said, ye shall not eat of every tree of the garden?"

A little play on the words here and there, and a distortion can be made as to what GOD has said. The intent is to deceive ...and to lie...and to fool...in a ploy that has been repeated untold times in order to bring Satan his joy of luring men, women, and children to their tragic ends, promised to those who reject the truth of the Bible. Read Matthew 4:1-11 for the account of "the master deceiver's" attempt to even distort the Scripture of GOD in his wilderness confrontation with Jesus Christ, the Son of God.

Listen friend, how many times has the penknife of Jehudi been utilized in the last several thousand years in an effort to get rid of God's words? Jeremiah 36:23,24 "And it came to pass, that when Jehudi had read three or four leaves, he cut it with the penknife, and cast it into the fire that was in the hearth, until all the roll was consumed in the fire that was on the hearth."

The Devil: The Employer Of Dupes


Look what happens next!

Get rid of God's word and the heart of man is brazened in the boldness of unbelief and pride. "Yet they were not afraid, nor rent their garments, neither the king, nor any of his servants that heard all these words."

Since 1881, for a little over a hundred years, Satan has employed an army of his dupes to translate from corrupt Greek texts into the English language over 200 translations of the Bible. The effect has been to bring disaster to England and America by bringing in religious apostasy. One of the members of the Lockman Foundation translation committee, Dr. Frank Logsdon, made a confession renouncing his association with the corrupt NASV translation.

Next: The Trojan Horse