The Face of the Son
(Or Beauty and the Beast)

A face presents an appearance. 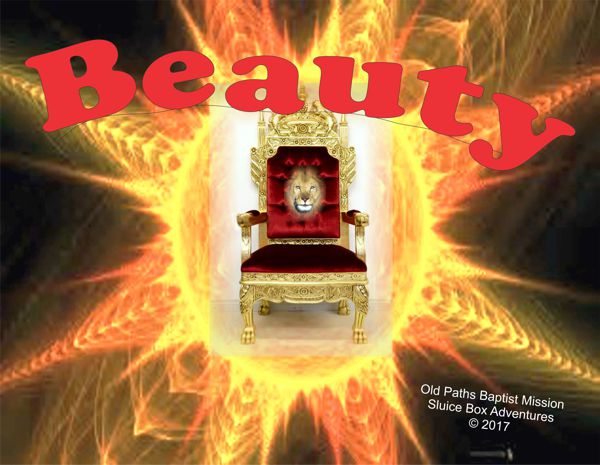 The Face of the Son

(Or Beauty and the Beast)

3. The Faces of Lions

Turn to the book of Ezekiel chapter one, verses five through ten.

Question: What is a face?

A face is a surface of something.

The surface of particular interest is the view to the personality of a person.

We have in the book of Ezekiel the likeness of four living creatures presented to us.

The likeness of something is determined primarily by its face.

A face presents an appearance.

Verse six: “And every one had four faces, and every one had four wings.”
What the Spirit of God is describing here, through the prophet Ezekiel, is the appearance of the Cherubim, of which four are left after the fall of the fifth Cherub … “the anointed cherub that covereth” [Ezekiel 28:14].

The face shown here of particular interest is “the face of a lion.”

Among the children of men they can be found.

“And of the Gadites … whose faces were like the faces of lions, and were as swift as the roes upon the mountains;” [1 Chronicles 12:8b].

Now, the Gadites are one of the twelve tribes of Israel.

Their land, along with the Reubenites, and half the tribe of Manasseh, was granted to them by Moses, and was located on the east side of the river Jordan.

We have this from the book of Deuteronomy: “And this land, which we possessed at that time, from Aroer, which is by the river Arnon, and half mount Gilead, and the cities thereof, gave I unto the Reubenites and to the Gadites.” [Deuteronomy 3:12]

These Gadites were the real easterners in the land of Israel.

Something else, they were the real cowboys of yesterdays. Cowboys?

Yes, real cowboys have a very great multitude of cattle.

See for this in the book of Numbers, chapter thirty-two:

Now, these appearances of the Gadites, having faces like the faces of lions, came as a result of prophecy.

See with me this prophecy in the book of Deuteronomy, chapter thirty-three, verse twenty: “And of Gad he said, Blessed be he that enlargeth Gad: he dwelleth as a lion, and teareth the arm with the crown of the head.” [Deuteronomy 33:20]

Do you see that?

They would dwell as a lion!

The lion will overcome at last. “Gad, a troop shall overcome him: but he shall overcome at the last.” [Genesis 49:19] God said it, and I believe it! Be strong, as these Gadites, as a lion in the FAITH: “Watch ye, stand fast in the faith, quit you like men, be strong.” [1 Corinthians 16:13]

4. The Face of a Beautiful Woman

We will find something of great importance here, and it is this: A person’s countenance reflects the inner person.

To repeat it in a different way:

It is the view to the personality of a person.

Here she is: In the book of First Samuel, chapter one, we find a woman of a very sad countenance. [This is Hannah.]

Now Hannah was fretting within herself because her spirit within her was provoked by an adversary. [Her adversary was this Peninnah]:

“And her adversary also provoked her sore, for to make her fret, because the LORD had shut up her womb.” [1 Samuel 1:6]

Notice here, when a person is fretting it will show up in the countenance of the face.

In other words, her countenance reflected what was in the inside of her.

Thus, the countenance reflects what’s in the heart [of man].

Now, if that heart seeks God, as Hannah’s did [see in verse eleven], then God will see the affliction in the heart of that soul [who sought him] with answered prayer.

The promises of God believed in the heart always change the countenance of a man.

Hannah was indeed sad no more and her face showed it: “And she said, Let thine handmaid find grace in thy sight. So the woman went her way, and did eat, and her countenance was no more sad.” [1 Samuel 1:18]

See this: Get it down!

The bride’s countenance draws the bridegroom to her.

For this, see with me in the Song of Solomon, chapter two, verse fourteen, the word of God:

“O my dove, that art in the clefts of the rock, in the secret places of the stairs, let me see thy countenance, let me hear thy voice; for sweet is thy voice, and thy countenance is comely.” [Song of Solomon 2:14]

Now, the face of a woman moves men.

More than that, a woman’s countenance can launch a thousand ships!

Do you doubt me? Men will go to war; men will march hundreds of miles for a woman who has a beautiful countenance.

This was true concerning Abigail in the Bible.

David was moved by Abigail as we shall find in the book of First Samuel chapter, twenty-five:

“Now the name of the man was Nabal; and the name of his wife Abigail: and she was a woman of good understanding, and of a beautiful countenance: but the man was churlish and evil in his doings; and he was of the house of Caleb.” [1 Samuel 25:3]

David was literally stopped dead in his tracks, and “kept ... from evil” [See First Samuel 25:39] because of the “good understanding” and “beautiful countenance” of Abigail.

Powerful is the woman who has these attributes! She can move men!

Now we come to the countenance of a ruddy man.

Next  5. The Countenance of a Ruddy Man