The Five Fallen Kings in the Revelation of Jesus Christ, Or Called The Stone Effect 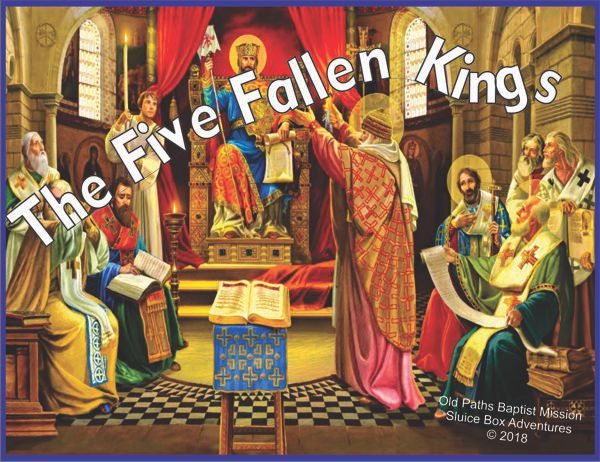 The Five Fallen Kings in the Revelation of Jesus Christ, Or Called The Stone Effect

Some of the greatest train wrecks that were ever recorded in the annals of history are contained in the Bible commentaries written by men … for men.

Now, you may ask: Why did these train wrecks occur?

Look at the fruit.

It surely is rotten!!!

There is an old saying which goes like this: The proof is in the pudding!

Time-wise, this is especially true since the year 1900 A.D.

Open your eyes and just observe! It is all to our ruin.

We are all “undone”.

It is as it says it is in the book of Isaiah:

“Then said I, Woe is me! for I am undone; because I am a man of unclean lips, and I dwell in the midst of a people of unclean lips: for mine eyes have seen the King, the LORD of hosts.” [Isaiah 6:5]

Let’s sit on the back of the scholars for a moment. For over one hundred and twenty years, the scholars [in consortium with the Madison Avenue advertisers] have fed us with a steady stream of corrupted New Age translations.

These New Age translations were produced by a deliberate corruption of God’s words [as they are found] in the BIBLE.

Here are two LESSONS we can LEARN:

1. The commentators in their commentaries will mislead you by way of their journeys in their rabbit trails.

2. The translators will mislead you [Yea, they will even lie to you] by means of their corrupted [New Age] translations. [See an explanation for this phenomenon in Second Corinthians 2:17.]

Now, I will leave off from this subject of the translators, and of their New Age translations, and zero in on the effect of the commentators who have driven us to our present state of affairs in the 21st century.

Well then, what is our present state?

We are all found lying down in the state of confusion.

Now, who is in charge here? Who is the king of this state?

The DEVIL [Satan] is the king in the state of confusion! SIN always takes you there!

“We lie down in our shame, and our confusion covereth us: for we have sinned against the LORD our God, we and our fathers, from our youth even unto this day, and have not obeyed the voice of the LORD our God.” [Jeremiah 3:25]

Pause here for a moment. We need to notice the following about the commentators. Are you ready?

The commentators often lead you off into the woods, and get you lost, because they themselves are lost, which is what happens if you read their books, or their articles, concerning the Bible, and also here, in the book of the Revelation of Jesus Christ.

What is more, these unbelieving commentators of the Bible have caused multiple, and massive derailments, of the multitude of people for the last two thousand years.

What a sad commentary.

Conclusion: The Devil is the author of confusion.

Cheer up, my friend!

See for all this, this promise located in the First Epistle of Corinthians: “For God is not the author of confusion, but of peace, as in all churches of the saints.” [1 Corinthians 14:33]

Conclusion: God is not the author of confusion.

Ho, ho. Here is now the targeted verse for this message [the verse of interest] in the Scripture.

We will go there now.

It is in the book of Revelation, chapter seventeen, verse ten: “And there are seven kings: five are fallen, and one is, and the other is not yet come; and when he cometh, he must continue a short space.” [Revelation 17:10]

Question: Have you ever considered who these seven kings are? If you have, then keep reading.

The first thing to notice is this: Five of the seven kings are already fallen [past tense].

[This is past tense from the Apostle John’s perspective.]

This message from the messenger will zero in on these five fallen kings.

Questions: Who are these kings? Can we identify them by name? Can we learn who they are from history?

Possibilities: Was one of them Alexander the Great? Or were they five of the pagan Roman emperors?

Another possibility for one of the five fallen kings was Genghis Khan. Was he one of them?

How about the kings of England?

Or how about the kings of France?

There are so many possibilities!

We act like a bunch of geese lost in a snow storm in the middle of January. We are lost in the woods!

Where can we go to find out who these five fallen kings were?

Take heart, my friend, and just BELIEVE THE HISTORY BOOK of THE AGES!

Let’s see if the Bible can show us who these fallen five kings were.

Here is the promise made by the Spirit of God in the book of Psalms: “The words of the LORD are pure words: as silver tried in a furnace of earth, purified seven times.” [Psalm 12:6]

We will begin this message, by opening to the book of Revelation, chapter seventeen, and read from verse fifteen: “The waters which thou sawest, where the whore sitteth, are peoples, and multitudes, and nations, and tongues” [Revelation 17:15].

Here, the Apostle John was told that the “waters” he was seeing “are peoples”.

Thus, we can learn [from believing the BIBLE] that the people of this earth are likened to waters—waters are people!

We also can learn that “the woman” John saw sitting on the backs of the people [the waters] [in verse fifteen] “is that great city, which reigneth over the kings of the earth” [Revelation 17:18].

Thus, we have here a “great city” [a woman] ruling [politically and spiritually] over “the waters” [the people] via the kings of this earth. [These particular five kings were surrogates for the woman].

With this, we can step through to these five following points:

2. Falling into the Pit

3. We See the Great Sell-Out

4. In the Kingdom Fixation