THE HAND OF MAN

The “Son of man” was preparing his disciples mentally and emotionally for what was soon to happen to Him. Jesus Christ Himself was soon to experience the ultimate cruelty any person could ever face: to “be delivered into the hands of men.” 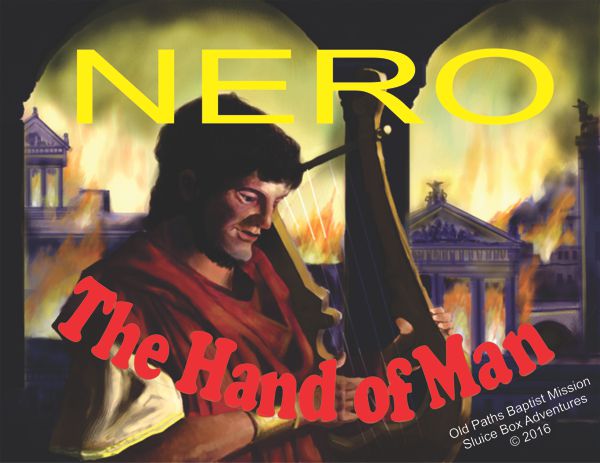 THE HAND OF MAN

We will begin this message with an event that occurred long ago in the reign of David, the King of Israel [2949c AM, 3659 JP, 1055 BC], and is recorded for us in the BIBLE in the book of Second Samuel, chapter twenty-four, verse ten:

“And David's heart smote him after that he had numbered the people. And David said unto the LORD, I have sinned greatly in that I have done: and now, I beseech thee, O LORD, take away the iniquity of thy servant; for I have done very foolishly.

For when David was up in the morning, the word of the LORD came unto the prophet Gad, David's seer, saying, Go and say unto David, Thus saith the LORD, I offer thee three things; choose thee one of them, that I may do it unto thee.

So Gad came to David, and told him, and said unto him, Shall seven years of famine come unto thee in thy land? or wilt thou flee three months before thine enemies, while they pursue thee? or that there be three days' pestilence in thy land? now advise, and see what answer I shall return to him that sent me.

So the LORD sent a pestilence upon Israel from the morning even to the time appointed: and there died of the people from Dan even to Beersheba seventy thousand men.

And when the angel stretched out his hand upon Jerusalem to destroy it, the LORD repented him of the evil, and said to the angel that destroyed the people, It is enough: stay now thine hand. And the angel of the LORD was by the threshingplace of Araunah the Jebusite.

And David spake unto the LORD when he saw the angel that smote the people, and said, Lo, I have sinned, and I have done wickedly: but these sheep, what have they done? let thine hand, I pray thee, be against me, and against my father's house.

And Gad came that day to David, and said unto him, Go up, rear an altar unto the LORD in the threshingfloor of Araunah the Jebusite. And David, according to the saying of Gad, went up as the LORD commanded.

And Araunah looked, and saw the king and his servants coming on toward him: and Araunah went out, and bowed himself before the king on his face upon the ground. And Araunah said, Wherefore is my lord the king come to his servant?

And David said, To buy the threshingfloor of thee, to build an altar unto the LORD, that the plague may be stayed from the people.

And Araunah said unto David, Let my lord the king take and offer up what seemeth good unto him: behold, here be oxen for burnt sacrifice, and threshing instruments and other instruments of the oxen for wood.

All these things did Araunah, as a king, give unto the king. And Araunah said unto the king, The LORD thy God accept thee.

And the king said unto Araunah, Nay; but I will surely buy it of thee at a price: neither will I offer burnt offerings unto the LORD my God of that which doth cost me nothing. So David bought the threshingfloor and the oxen for fifty shekels of silver.

And David built there an altar unto the LORD, and offered burnt offerings and peace offerings. So the LORD was intreated for the land, and the plague was stayed from Israel.” [2 Samuel 24:10-25]

David knew the hand of man was very cruel, and was without mercy.

Now, fast forward in time [4036 AM, 4746 JP, 33 AD] to the historical event of the crucifixion of the Son of God, Jesus Christ. We have here these prophetic “sayings” in the gospel according to Luke, chapter nine, verses forty-four and forty-five:

“Let these sayings sink down into your ears: for the Son of man shall be delivered into the hands of men. But they understood not this saying, and it was hid from them, that they perceived it not: and they feared to ask him of that saying.” [Luke 9:44-45]

The “Son of man” was preparing his disciples mentally and emotionally for what was soon to happen to Him. Jesus Christ Himself was soon to experience the ultimate cruelty any person could ever face: to “be delivered into the hands of men.”

Let it “sink down into your ears” and yea, let it sink lower … even to your heart, for there is nothing worse under the sun that can happen to any man, woman or child … than to fall “into the hands of men.”

You say, “Now, what on earth are you talking about? Men are not so bad!”

Really? Then, I ask you to do this! Study history, and then you will see just what man has done to his fellow man over the millennia. Read the account of Nero, a Roman emperor, and you will see what the hands of men are like.

See for this the following from Fox’s Book of Martyrs:

The First Persecution, Under Nero, A.D. 67

The first persecution of the Church took place in the year 67, under Nero, the sixth emperor of Rome. This monarch reigned for the space of five years, with tolerable credit to himself, but then gave way to the greatest extravagancy of temper, and to the most atrocious barbarities. Among other diabolical whims, he ordered that the city of Rome should be set on fire, which order was executed by his officers, guards, and servants. While the imperial city was in flames, he went up to the tower of Macaenas, played upon his harp, sung the song of the burning of Troy, and openly declared that 'he wished the ruin of all things before his death.' Besides the noble pile, called the Circus, many other palaces and houses were consumed; several thousand perished in the flames, were smothered in the smoke, or buried beneath the ruins.

This dreadful conflagration continued nine days; when Nero, finding that his conduct was greatly blamed, and a severe odium cast upon him, determined to lay the whole upon the Christians, at once to excuse himself, and have an opportunity of glutting his sight with new cruelties. This was the occasion of the first persecution; and the barbarities exercised on the Christians were such as even excited the commiseration of the Romans themselves.

Nero even refined upon cruelty, and contrived all manner of punishments for the Christians that the most infernal imagination could design. In particular, he had some sewed up in skins of wild beasts, and then worried by dogs until they expired; and others dressed in shirts made stiff with wax, fixed to axletrees, and set on fire in his gardens, in order to illuminate them. This persecution was general throughout the whole Roman Empire; but it rather increased than diminished the spirit of Christianity. In the course of it, St. Paul and St. Peter were martyred.

To their names may be added, Erastus, chamberlain of Corinth; Aristarchus, the Macedonian, and Trophimus, an Ephesians, converted by St. Paul, and fellow-laborer with him, Joseph, commonly called Barsabas, and Ananias, bishop of Damascus; each of the Seventy.”

Next  1. The Essence of Man