John Leland's Objections to the Constitution without a Bill of Rights ... sent to James Madison by Joseph Spencer, 28 February 1788.


John Leland and The Bill of Rights 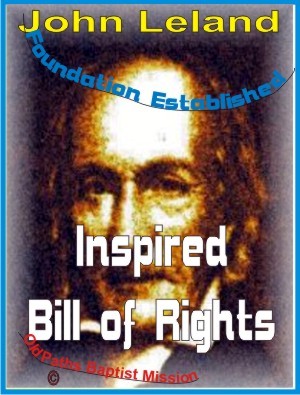 John Leland's Objections to the Constitution
without a Bill of Rights ... sent to James Madison by Joseph Spencer, 28 February 1788.

According to your Request, I have sent you my objections to the Federal Constitution, which are as follows:

1st. There is no Bill of Rights, whenever a Number of men enter into a state of Society, a Number of individual Rights must be given up to Society, but there should be a memorial of those not surrendered, otherwise every natural & domestic Right becomes alianable, which raises Tyranny at once, and this is as necessary in one form of Government as in another.

2nd. There is a Contradiction in the Constitution, we are first inform'd that all Legislative Powers therein granted shall be Vested in a Congress composed of two houses, and yet afterwards all the power that lies between a majority and two thirds, which is one Sixth part, is taken from these two Houses, and given to one man, who is not only chosen two Removes from the people, but also the head of the executive Department.

3rd. The House of Representatives is the only free, direct Representation of the body of the people, and yet in Treaties which are to be some of the Supreme Laws of the Land, this House has no voice.

4th. The Time place and Manner of chusing the members of the Lower house is intirely at the Mercy of Congress, if they Appoint Pipin or Japan, or their ten Miles Square for the place, no man can help it. How can Congress guarantee to each State a Republican form of government, when every principle of Republicanism is sapped.

5th. The Senators are chosen for Six years, and when they are once Chosen, they are impeachable to nun but themselves, No Counterprize is left in the hands of the People, or even in Legislative Bodys to check them, Vote as they will, there they set, paying themselves at Pleasure.

6th. I utterly oppose any Division in a Legislative Body, the more Houses, the more parties, the more they are Divided, the more the Wisdom is Scattered, sometimes one house may prevent the error of another and the same stands true of twenty Houses. But the question is, whether they do more good than harm, the Business is certainly thereby retarded and the Experience inhanced.

7th. We are not informed whether Votes in all cases in the Lower house are to be by Members or by States, -- I Question whether a man could find out the Riddle by plowing, with Sampsons Heiffers, if each Member is not to have a Vote, who are they to be chosen according to Numbers of Inhabitants, and why should Virginia be at ten times the Expense of Delaware for the same Powers, if the Votes are always to be by States, why is it not Expressed as in the choice of a President, in certain cases, If each Member is to have a Vote Why is it Expressed concerning Senators, and not concerning Representatives, this blank appears to be designed, to encourage the Small States with hopes of Equality, and the Large States with hopes of Superiority.

8ly. We have no assurance that the Liberty of the press will be allowed under this Constitution.

9ly. We have always been taught that it was dangerous mixing the Legislative and Executive Powers together in the same body of People, but in this Constitution we are taught better, or worse.

10ly. What is clearest of all -- Religious Liberty, is not sufficiently secured, No Religious test is Required as a qualification to fill any office under the United States, but if a Majority of Congress with the President favour one System more then another, they may oblige all others to pay to the support of their System as much as they please, and if Oppression does not ensue, it will be owing to the Mildness of Administration and not to any Constitutional defence, and of the Manners of People are so far Corrupted, that they cannot live by Republican principles, it is Very Dangerous leaving Religious Liberty at their Mercy."

Revd. John Leeland's Objections to the Federal Constitution Sent to Colo. Thos. Barber by his Request, a Coppy taken by Jos. Spencer entended for the Consideration of Capt. Jas. Walker Culpeper.

The original copy of this letter is in the Madison Papers housed in the Library of Congress. It was not included in the edition of Madison's Papers edited by Rutland and Rachal and published by the University of Chicago Press in 1973.