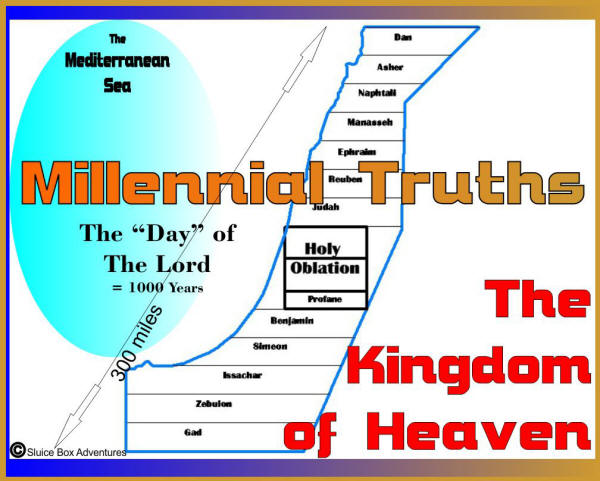 I scan with my eyes these hills and these ridges in this land of the Cumberland Plateau, and take in the vastness, and the depth of bountiful beauty in the creation before me.   I can hear the song of many birds interspersed with the bleating of the goats in the adjoining pasture.  I am filled with the wonder of it all.

Though I am filled with all these sights and sounds, I know something is very wrong out there.   I can sense it!   I can feel a weariness in all that is before me, and around me here in all these mountains.  It is this: all these hills before me and all the creatures therein are tired; yea, further than that, they even are “in pain”.

Though all these hills and all these mountains before me with all their creatures therein, seem to be normal, they, if we listen carefully, do groan and do suffer “in pain”.   The whole creation is subject to the pains of Hell.  [Psalm 116:3] “The sorrows of death compassed me, and the pains of hell gat hold upon me: I found trouble and sorrow.”

2. The Sorrows of Death [in the six days]

I stand here in deep reflection thinking of these hills and all the creation, and realize the “sorrows of death” have “compassed” us, and “the pains of hell” have a hold upon all mankind, and all creation.   We have indeed “found trouble and sorrow” according to Psalm 116:3: “The sorrows of death compassed me, and the pains of hell gat hold upon me: I found trouble and sorrow.”

3. The Trouble of Pollution [in the six days]

The true pollution in this world lies in the “ground”.  The “ground” of this earth has been polluted with the innocent blood of men.  This innocent blood that cries from the “ground”.  For this, see in the book of Genesis, the first murder of a man:  “And he said, What hast thou done? the voice of thy brother's blood crieth unto me from the ground.  And now art thou cursed from the earth, which hath opened her mouth to receive thy brother's blood from thy hand;” [Genesis 4:10-11]

The “ground” of this old earth is completely, and absolutely, polluted with the blood of the innocents of this world [men, women, and children] all down through the six thousand years of human history … in the direct violation of the laws of the GOD of all Heaven and of all Earth.

In the book of Numbers, chapter thirty-five, God commands Israel to “not pollute the land”: “So ye shall not pollute the land wherein ye are: for blood it defileth the land: and the land cannot be cleansed of the blood that is shed therein, but by the blood of him that shed it.” [Numbers 35:33]

Yet Israel refused to hearken or obey: “And shed innocent blood, even the blood of their sons and of their daughters, whom they sacrificed unto the idols of Canaan: and the land was polluted with blood.” [Psalm 106:38]             Now, it gets worse: “But they mocked the messengers of God, and despised his words, and misused his prophets, until the wrath of the Lord arose against his people, till there was no remedy.”  [2 Chronicles 36:16]

Israel, therefore, followed all the other nations of the world … to the hurt of all in the world, concerning “innocent blood”.

What is the bottom-line condition of  all mankind?  The bottom-line condition is this: we are all guilty before God!   Do you doubt me about this thing?  Then, do not believe me; believe what God has said concerning this whole matter, which is given to us in Romans three, verse nineteen: “Now we know that what things soever the law saith, it saith to them who are under the law: that every mouth may be stopped, and all the world may become guilty before God.” [Romans 3:19]

· The earth is undone!

· We are all undone!

We can now come to this prognosis:

“The sorrows of death compassed me, and the pains of hell gat hold upon me: I found trouble and sorrow.”

We are troubled with the pollutions of all this shed “innocent blood” that cries from the ground for justice!

We are caught in the “pains of hell”!

We are trapped by the “sorrows of death”!

We have indeed “found trouble and sorrow”!

We have received [we might say] our just dessert [our just due], and thereby, the whole creation has suffered because of our sins, which sins have accumulated for the last six thousand years as “thorns”.  The “thorns” have come, and they will stay … till the “remedy” is applied: “Thorns also and thistles shall it bring forth to thee; and thou shalt eat the herb of the field;” [Genesis 3:18].

Now, here is the “remedy”: “But as many as received him, to them gave he power to become the sons of God, even to them that believe on his name: Which were born, not of blood, nor of the will of the flesh, nor of the will of man, but of God.” [John 1:12-13]

If any man, or any woman, or any child puts their trust in Jesus Christ for their salvation, then the SCRIPTURE [which is in Psalm 116 verses one through four] will literally be fulfilled in that person’s heart.

“I love the Lord, because he hath heard my voice and my supplications.  Because he hath inclined his ear unto me, therefore will I call upon him as long as I live.  The sorrows of death compassed me, and the pains of hell gat hold upon me: I found trouble and sorrow.  Then called I upon the name of the Lord; O Lord, I beseech thee, deliver my soul.”

At this point, we are now ready to enter into the R-E-S-T … the restitution of all things … a “sea change”!

Next: 4. The Restitution of All Things - The Rest [the seventh day]