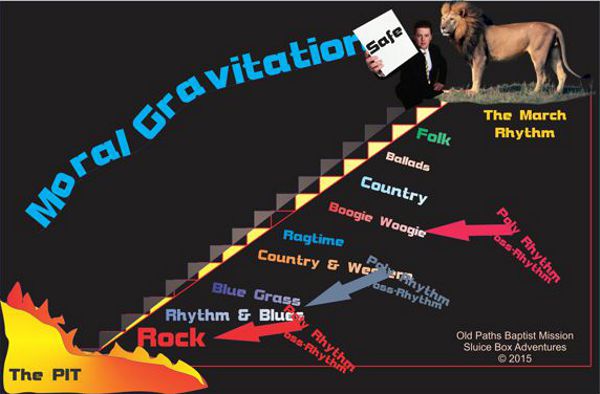 The voice of signification includes both the words and the music.

· The words … come from the voice of the things with life … giving sound.

· The music comes from things without life … giving sound.

The distinction of sounds is to be maintained for the life-giving order.

Music accompanies the words, and is composed of three elements:

The word melody is found 4 times in the Kings James Bible of 1611.  Webster’s 1828 dictionary defines the word as follows:

To constitute melody, the sounds must be arranged according to the laws of rhythms, measure, or the due proportion of the movements to each other.

Melody differs from harmony, as it consists in the agreeable succession and modulation of sounds by a single voice; whereas harmony consists in the accordance of different voices or sounds.  Melody is vocal or instrumental.”

“To make melody in the heart, to praise God with a joyful and thankful disposition, ascribing to him the honor due to his name. Eph.5.”

The word harmony is not found in the Kings James Bible of 1611.  However, Webster’s 1828 dictionary defines the word as follows:

“H`ARMONY, n.  [L. harmonia; Gr. a setting together, a closure or seam, agreement, concert, to fit or adapt, to square.]

1. The just adaptation of parts to each other, in any system or composition of things, intended to form a connected whole; as the harmony of the universe.  Equality and correspondence are the causes of harmony.   All discord,harmony not understood.

2.  Just proportion of sound; consonance; musical concord; the accordance of two or more intervals or sounds, or that union of different sounds which pleases the ear; or a succession of such sounds, called chords. Ten thousand harps that tuned Angelic harmonies.

3. Concord; agreement; accordance in facts; as the harmony of the gospels.

4. Concord or agreement in views, sentiments or manners, interests, &c., good correspondence; peace and friendship. The citizens live in harmony.

5. Natural harmony, in music, consists of the harmonic triad or common chord.  Artificial harmony, is a mixture of concords and discords. Figured harmony, is when one or more of the parts move, during the continuance of a chord, through certain notes which do not form any of the constituent parts of that chord.

6. Perfect harmony implies the use of untempered concords only.  Tempered harmony is when the notes are varied by temperament.”

1. In music, variety in the movement as to quickness or slowness, or length and shortness of the notes; or rather the proportion which the parts of the motion have to each other.

“The Meter - The “meter” or “metre” is the rhythmic structure of music.

The Beat – The “beat” is a pulsation; as the beat of the pulse.  In music the “beat” is the basic unit of time, which forms the pulse of a regularly repeating event.  The “beat” is refers to the tempo or meter.

Rhythm [in music] is a repeating sequence of stressed, and unstressed beats, called "strong" and "weak" and are divided into bars that are organized by a time signature and tempo indications.

Metric levels faster than the beat level are division levels, and the slower levels are multiple levels.

The “downbeat” is the first beat of the bar, i.e. number 1.  The “upbeat” is the last beat in the previous bar which immediately precedes, and hence anticipates, the “downbeat”.  An anticipatory note, or succession of notes, occurring before the first bar line of a piece is sometimes referred to as an “upbeat” figure, section, or phrase.

In music that progresses regularly in 4/4 time, counted as "1 2 3 4, 1 2 3 4 ..." the first beat of the bar (downbeat) is meant to be the strongest accent in the melody, and the likeliest place for a chord change, the third is the next strongest: these are "on" beats. The second and fourth are weaker - the "off-beats".   The subdivisions (like eighth notes) that fall between the pulse beats are even weaker.

The effect can be easily simulated by evenly, and repeatedly, counting to four. As a background against which to compare these various rhythms a bass drum strike on the downbeat and a constant eighth note subdivision on ride cymbal have been added, which would be counted as follows (bold denotes a stressed beat):

A rhythm with the stress on the downbeat as the first beat of the bar, and has an “upbeat” as the last beat in the previous bar is an in-step rhythm … a march.

Now, he that privily lurked has come out of the background to play.  He who is a “lying spirit” has offered his music box to the men of this world.

Thus begins the subliminal movement of the DEVIL to the "unexpected" or syncopated beat.

Like a circling wolf moving in for the kill, he begins tampering with the music of God.  He carefully moves to the off-beat.

“The off-beat is the syncopation that emphasizes the weak even beats of a bar, as opposed to the usual on-beat.”

By sleight of hand, the “lying spirit” “replaces the downbeat by a rest, or is tied over from the preceding bar.”

Note this: “the downbeat can never be the “off-beat” because it is the strongest beat in 4/4 time.”

So what does Satan do in his wizardry?   He craftily brings in his invention of the darkness … a “backbeat” … “a syncopated accentuation on the "off" beat.  In a simple 4/4 rhythm these are beats 2 and 4.”

Now we come to the polyrhythm, which involves two or more concurrent, conflicting rhythms.  The polyrhythm comes from within the “mist of darkness”, which is the very realm of Satan.  This “many-rhythm” invention from his music box is used, as the ultimate device, to hook the flesh of men to the dance of the boogie-woogie.

This fundamental hooking technique of the African polyrhythm transfers by amalgamation to a downward moral gravitating music for the end times.

A rhythm that is “out of step”; and places the “stress” on the "unexpected" or a syncopated beat.

Also, in great advancement of the music of darkness by way of invention, it produces a polyrhythm, or a subset of a polyrhythm called a cross-rhythm, designed to drive the souls of men to their final destruction … to the PIT.

The “in-step” music [sometimes narrowly defined as March music] moves man by steps in an orderly way to God.

The movement is always upward and forward and involves a progression to an advanced position … in a time-line established by God.

The “Quick March” tempo is around 120 beats per minute; [the Roman standard is 60 beats per minute]. The tempo is meant to match the pace of soldiers walking and remaining in step. Both tempos match the standard rate of 120 steps per minute.  The form of a march typically consists of 16 to 32 measures in length with multiple repeats until a new section.

"Most importantly, a march consists of a strong and steady percussive beat reminiscent of military field drums.”

The “March” music rhythm moves man to a moral, emotional, and physical health.

The “boogie-woogie” music rhythm [a polyrhythm] moves man to an immoral, emotional, and physical sickness [to disorder].

The movement is always backward and downward, step by step, to the abyss of destruction, which is the Pit of the Devil.

The “break beat,” or the “offbeat,” is the syncopation, and is derived from the African poly-rhythm.

The “backbeat” is the beat of the “god of this world”.

Here are the downward steps:

1.  Next, we have country music, “which originated in Southern United States, in Atlanta, Georgia, in the 1920s.”

1.  After the War Between the States [in the 1870s], we step downward with the rise of boogie-woogie music born “within the African-American community.”

Now note: The boogie-woogie is mainly associated with dancing.

4. Next, the boogie-woogie music gave rise to the jazz music, and downward we go.

5. Then, the jazz music gave rise to the ragtime music.  [It should be noted that “jazz makes heavy use of improvisation, poly-rhythms, syncopation, and the swung note.]”

We are going down.

6. Bluegrass music came from an amalgamation of Appalachian music and African music through incorporation of the jazz elements [the boogie-woogie].

7. Then the jazz music [along with ragtime music] gave rise to the rhythm and blues music which originated in the 1940s.

We are getting closer to the bottom.

We are at the bottom step, and the next one down is in the FIRE.