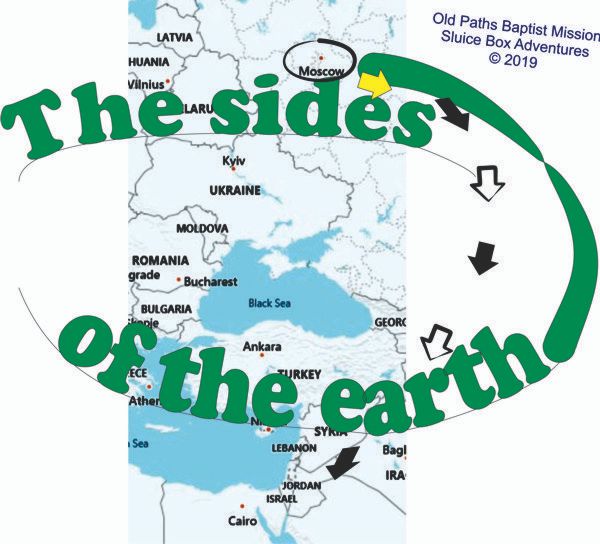 There are yet three more gigantic wars coming to this earth [before the end of time].

All three of these wars are going to be fought for the purpose of ridding the earth of one very small nation.

This small nation … is the nation of Israel.

Now, who in high places [Ephesians 6:12] would want to instigate these wars, and do such a thing as that?

Just who is this instigator?

Why, it is Satan [along with all his willing cohorts in crime].

It all comes from a deep-seated hatred.

Yes, Satan, with his crowd hates God [Romans 1:30], he hates the Bible [although he uses the Bible], he hates Israel, and further than that, he hates all the believers in Jesus Christ … which is the church [Colossians 1:24].

[Observation: There are people who USE the Bible but do not BELIEVE the Bible.]

Now, on the matter of these wars, two out of three of these wars involve the descendants of Magog, Tubal, and Meshech.

Question: Who is Magog? Who is Tubal? Who is Meshech?

For the answer to these questions, we will need to go to the book of beginnings, Genesis, chapter ten, verse two: “The sons of Japheth; Gomer, and Magog, and Madai, and Javan, and Tubal, and Meshech, and Tiras.” [Genesis 10:2]

• Magog is one of the sons of Japheth.

• Tubal is one of the sons of Japheth.

• Meshech is one of the sons of Japheth.

These three are brothers!

The decendants of these brethren, listed here, live in the north country, or in the north parts of the sides of the earth.

Commentary: The one remaining war [of these three wars] involves the ten kings, and the beast, which scene is described in the book of the Revelation, and this war occurs just before the beginning of the millennium. “And the ten horns which thou sawest are ten kings, which have received no kingdom as yet; but receive power as kings one hour with the beast.” [Revelation 17:12]

Question: Where are these wars fought?

Well, according to the Bible, two of the three wars are fought in two different valleys [albeit these two valleys are in close proximity to the other.]

And, in contrast, the third war is fought in a theater outside of any valley, and completely circumscribes the Kingdom of Heaven [THE LAND].

By the way, this kingdom [the Kingdom of Heaven] is coming to this earth, and this very soon!

Do you believe this?

Well, the BOOK proclaims it! Amen! Here it is. It is found in the book of Matthew, in chapter six, in verse ten: “Thy kingdom come. Thy will be done in earth, as it is in heaven.” [Matthew 6:10]

Heaven comes to the earth in the form of a kingdom, in which kingdom there is the restitution of all things [Acts 3:21].

“And I say unto you, That many shall come from the east and west, and shall sit down with Abraham, and Isaac, and Jacob, in the kingdom of heaven.” [Matthew 8:11]

Now, here is another question for you.

When will these wars be fought?

Well, according to the Bible, two of these wars are fought before the millennium [which is the Kingdom of Heaven, the one-thousand-year reign of Jesus Christ on this earth], and the last war is fought at the end of the millennium.

This third, and last war, [chronologically] is identified in two books of the Bible, first, in the book of Ezekiel, chapter thirty-eight, and, lastly, in the book of the Revelation of Jesus Christ, in chapter twenty, in verses seven and eight:

“And when the thousand years are expired, Satan shall be loosed out of his prison,
And shall go out to deceive the nations which are in the four quarters of the earth, Gog and Magog, to gather them together to battle: the number of whom is as the sand of the sea.
And they went up on the breadth of the earth, and compassed the camp of the saints about, and the beloved city: and fire came down from God out of heaven, and devoured them.” [Revelation 20:7-8]

Thus, the foregoing gives a brief summary of what is impending for the inhabitants of this earth.

However, in this message, the focus will be on the first of the two gigantic wars that will fought before the Millennium.

[Note: Remember both of these valleys are in very close proximity to each other. In fact, they are so close you could be fooled into thinking it is the very same location.]

Observation: Things that are different are not the same.

IV. The Remnant of the Giants

First, let’s fasten onto a promise found in God’s word. This promise involves a land grant [the LAND of PROMISE], being given to one particular nation … Israel, which promise is located in The Second Book of Moses—Exodus, chapter three, verse eight. We read there:

Now, we need to turn to The Fifth Book of Moses—Deuteronomy, chapter three, to see this opposition to the LAND PROMISE being given to the nation of Israel. We will read from there the first thirteen verses:

“Then we [Israel] turned, and went up the way to Bashan: and Og the king of Bashan came out against us, he and all his people, to battle at Edrei.

And the LORD said unto me, Fear him not: for I will deliver him, and all his people, and his land, into thy hand; and thou shalt do unto him as thou didst unto Sihon king of the Amorites, which dwelt at Heshbon.

So the LORD our God delivered into our hands Og also, the king of Bashan, and all his people: and we smote him until none was left to him remaining.

And we took all his cities at that time, there was not a city which we took not from them, threescore cities, all the region of Argob, the kingdom of Og in Bashan.

All these cities were fenced with high walls, gates, and bars; beside unwalled towns a great many.

But all the cattle, and the spoil of the cities, we took for a prey to ourselves.

And we took at that time out of the hand of the two kings of the Amorites the land that was on this side Jordan, from the river of Arnon unto mount Hermon; (Which Hermon the Sidonians call Sirion; and the Amorites call it Shenir;)

For only Og king of Bashan remained of the remnant of giants; behold, his bedstead was a bedstead of iron; is it not in Rabbath of the children of Ammon? nine cubits was the length thereof, and four cubits the breadth of it, after the cubit of a man.

And this land, which we possessed at that time, from Aroer, which is by the river Arnon, and half mount Gilead, and the cities thereof, gave I unto the Reubenites and to the Gadites.

And the rest of Gilead, and all Bashan, being the kingdom of Og, gave I unto the half tribe of Manasseh; all the region of Argob, with all Bashan, which was called the land of giants.” [Deuteronomy 3:1-13]

When Israel came up into the LAND promised to them of God, after spending forty years in the wilderness, they took a route through the land of the Amorites, which land included the kingdom of Bashan. The peculiar thing about the kingdom of Bashan was that it was a land whose inhabitants were of the remnants of the giants.

Next  V. The Giants in Opposition