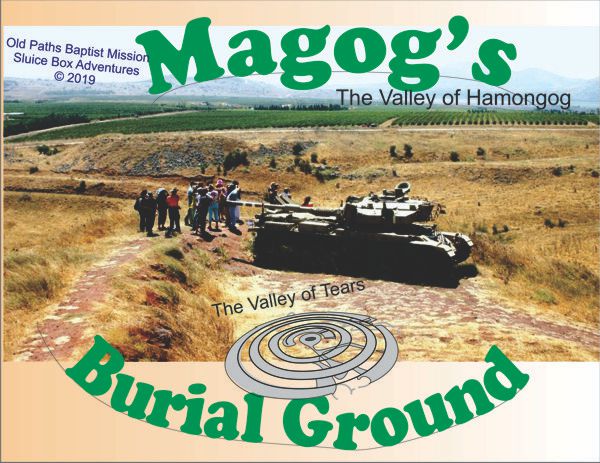 V. The Giants in Opposition

Get it down, the Devil [Satan], and all his confederates, oppose God, and anybody who loves God.

The apex of this opposition will be shown in its fullest when the man of sin is revealed: “Who opposeth and exalteth himself above all that is called God, or that is worshipped; so that he as God sitteth in the temple of God, shewing himself that he is God.” [2 Thessalonians 2:4]

Recall what was said in the Bible [the record] concerning Goliath, a Philistine, a remnant of the giants. This Goliath, was just a runt of a giant measuring only six cubits and a span in height [or 9’ 9” high]. This is found in First Samuel, chapter seventeen, verse four].

Now, where is the proof for all this?

Well, remember Og, the king of Bashan [in our text above], slept in a bed that was thirteen feet long [or 9 cubits]. Certainly, Old Og was in the range of twelve feet in height based on the size of his bed!

Get it down: The giants in history have always been in opposition to God, and to the people of God. [See this truth for yourself in The First Book of Moses—Genesis, chapter six.]

After the Flood these remnants of the giants [the sons of Anak] show up again to resist the people of Israel coming into the Land of Promise. For this turn to the book of Numbers, chapter thirteen, verse thirty-three: “And there we saw the giants, the sons of Anak, which come of the giants: and we were in our own sight as grasshoppers, and so we were in their sight.” [Numbers 13:33]

We find in the Scripture [God’s word] that Moses had to smite these giants, and cast them out, in order to give their land to the tribe of Manesseh: “All the kingdom of Og in Bashan, which reigned in Ashtaroth and in Edrei, who remained of the remnant of the giants: for these did Moses smite, and cast them out.” [Joshua 13:12]

Commentary: There is always opposition by these giants to the BOOK, and to the people who believe in the BOOK!

There was opposition in David’s day.

There is opposition to us in our day.

They are just not the physical giants. They are spiritual giants.

The father of both of these giants [the physical and the spiritual] is the same person … THE DEVIL [Satan] [Ephesians 6:12].

This is spiritual warfare!

We read of this spiritual warfare in the Epistle to the Ephesians, chapter six, verses ten and eleven.

Now, mind you, this exhortation is for all of us to behoove us who are believers in Jesus Christ living today in the 21st century!

"Finally, my brethren, be strong in the Lord, and in the power of his might. Put on the whole armour of God, that ye may be able to stand against the wiles of the devil.” [Ephesians 6:10-11]

VI. The Wheel of the Giants

In this Valley of Tears [Hamongog] there is a peculiar site known as the Wheel of the Giants that will be the future burying place for Gog and all his multitude.

This Wheel of the Giants [also known in Israel as Rogem Hiri], is located ten miles from “the east of the sea” [the Sea of Galilee] in the Golan Heights of Israel [Bashan – see Eze 39:18] and is constructed with five concentric walls, with the outer wall being 520 feet in diameter.

Now, note this wheel forms the bull’s-eye for the location of the burial ground [of five sixths of this multitude of people].

These giants or “mighty men” [Genesis 6] used occultism along with their engineering skills to construct the Wheel of the Giants.

VII. The Burial Place for Gog

Now, let’s look at one particular prophecy in the Bible found in the book of Ezekiel, chapter thirty-nine.

In the very near future, God will cause a people “from the north parts” [Ezekiel 39:2] [north of Israel] to come to the Valley of Tears which in the Bible is called “the valley of the passengers.” [This is the valley of Hamongog.]

We read this in verses one and two: “Therefore, thou son of man, prophesy against Gog, and say, Thus saith the Lord GOD; Behold, I am against thee, O Gog, the chief prince of Meshech and Tubal: And I will turn thee back, and leave but the sixth part of thee, and will cause thee to come up from the north parts, and will bring thee upon the mountains of Israel:” [Ezekiel 39:1-2].

Notice, these people come from the north country, or the north parts of the sides of the earth, and furthermore, God is against them! Remember, these people are the descendants of Magog, Tubal, and Meshech.

Verses three through five: “And I will smite thy bow out of thy left hand, and will cause thine arrows to fall out of thy right hand.

Thou shalt fall upon the mountains of Israel, thou, and all thy bands, and the people that is with thee: I will give thee unto the ravenous birds of every sort, and to the beasts of the field to be devoured.

God will smite their weapons in a supernatural scene, and multitudes of men will fall!

Verses six through eight: “And I will send a fire on Magog, and among them that dwell carelessly in the isles: and they shall know that I am the LORD.

So will I make my holy name known in the midst of my people Israel; and I will not let them pollute my holy name any more: and the heathen shall know that I am the LORD, the Holy One in Israel.

There is a fire of judgment coming for Magog, and for those who are confederate with him.

Verses nine through fifteen: “And they that dwell in the cities of Israel shall go forth, and shall set on fire and burn the weapons, both the shields and the bucklers, the bows and the arrows, and the handstaves, and the spears, and they shall burn them with fire seven years:

And seven months shall the house of Israel be burying of them, that they may cleanse the land. Yea, all the people of the land shall bury them; and it shall be to them a renown the day that I shall be glorified, saith the Lord GOD.

And they shall sever out men of continual employment, passing through the land to bury with the passengers those that remain upon the face of the earth, to cleanse it: after the end of seven months shall they search.

And the passengers that pass through the land, when any seeth a man's bone, then shall he set up a sign by it, till the buriers have buried it in the valley of Hamongog.” [Ezekiel 39:9-15]

The consequence in this utter destruction [in this coming gigantic war] is seven years of fire [burning the weapons], along with seven years of spoiling, which includes seven months in a campaign to build a massive grave site, with the center of this grave site roughly congruent with the center of the Wheel of the Giants, the same which was built by the remnant of the giants in the days of Og [the king of Bashan].

Verses sixteen through twenty-one: “And also the name of the city shall be Hamonah. Thus shall they cleanse the land. And, thou son of man, thus saith the Lord GOD; Speak unto every feathered fowl, and to every beast of the field, Assemble yourselves, and come; gather yourselves on every side to my sacrifice that I do sacrifice for you, even a great sacrifice upon the mountains of Israel, that ye may eat flesh, and drink blood.

Ye shall eat the flesh of the mighty, and drink the blood of the princes of the earth, of rams, of lambs, and of goats, of bullocks, all of them fatlings of Bashan.

And ye shall eat fat till ye be full, and drink blood till ye be drunken, of my sacrifice which I have sacrificed for you.

Thus ye shall be filled at my table with horses and chariots, with mighty men, and with all men of war, saith the Lord GOD.

And I will set my glory among the heathen, and all the heathen shall see my judgment that I have executed, and my hand that I have laid upon them.” [Ezekiel 39:16-21]

Reminiscent of the gigantic war in the valley of Armageddon [Revelation 16:16], this war also involves an invitation by God for every fowl, and every beast of the field, to come to the sacrifice of Gog—all to glory of God before the whole world.

The valley of Armageddon forms the perfect route for maritime-based nations to attack Israel from the Mediterranean Sea [at the northwestern end of the valley], to connect to the Sea of Galilee [on the east] and to the Jordan Valley [to the south].

The valley of Hamongog forms the perfect route for the Asiatic land-based nations to attack Israel from the north through Bashan [the Golan Heights] and then west and south into Israel.

So close, yet they are not the same.

Two different things are not the same thing.