GOD Has Written a BOOK

GOD has written a BOOK! 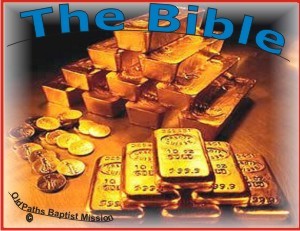 GOD wants you to BELIEVE his BOOK! Can GOD give us his WORDS [INSPIRATION] and then PRESERVE his WORDS without error to this present day?

The BIBLE is this BOOK!!! Its Author is God. And in the English language, it is the King James Bible!

"Blessed are the undefiled in the way, who walk in the law of the LORD. Blessed are they that keep his testimonies, and that seek him with the whole heart" [Psalm 119:2].

It is they "that seek him with the whole heart" that will hide the commandments of God in their hearts for a great reason. "Thy word have I hid in mine heart, that I might not sin against thee" [Psalm 119:11].

The true believer in Jesus Christ will joyously and resoundingly shout out, "Blessed art thou, O LORD: teach me thy statutes. With my lips have I declared all the judgments of thy mouth. I have rejoiced in the way of thy testimonies, as much as in all riches. I will meditate in thy precepts, and have respect unto thy ways. I will delight myself in thy statutes: I will not forget thy word" [Psalm 119:12-16].

I will not forget thy word!

What is God's word? What did Satan that old master of deceit say almost 6,000 years ago? "Yea, hath God said?" What are the conservative Greek and Hebrew scholars saying today? "Yea, hath God said?" [Believing is belief, and unbelieving is unbelief!] They say the old King James Bible is filled with errors and contradiction. The answer to this!!! What errors? They can’t prove it! "Contradiction! No, there is no contradiction. There is an apparent discrepancy...because of the stupidity of the reader,” said the old preacher. Beware of the LEAVEN of the SCHOLARS [educators].


"It is written, man shall not live by bread alone, but by every word that proceedeth out of the mouth of God" [Matthew 4:4, also see Deut.8:3].

Believing the Book is not to be a reference to any Greek or Hebrew manuscripts or even to the original autographs.

Why? The original autographs are long gone! All we have are the copies of the copies...of the copies. Jesus Christ himself quoted SCRIPTURE from a COPY in Mark 12:10: “And have ye not read this scripture; The stone which the builders rejected is become the head of the corner.”

Here is the problem! Which one of the over 5,000 manuscript sources [for the N.T. Greek] is the perfect word of God?

The Textus Receptus is representative of The Majority Greek [Traditional] text. Even though The Majority Text representatives agree together in the main [which represent over 90% of the manuscripts], which one is the word of God? Which Greek manuscript would your Bible college professor choose? Or would he just "wimp" and take the easy way out and say, "I believe the word of God is the sum total of all the manuscripts." My! Which manuscript did he read and memorize today?

And there are some who would say: "I believe that the 23rd edition of the Nestle Greek New Testament is God's word." [There are over 20 Greek Texts.] It is men like this that reject The Textus Receptus that underlies our English A.V.1611 Bible.

The conservative "fundamental bastion of the faith", Bob Jones University, espouses the position that the New American Standard translation of the Bible is the most accurate translation in the English language. Dr. Stewart Custer, Chairman, Division of Bible, in a letter stated: "There is no perfect English translation", and went on to say that, "The original Greek and Hebrew manuscripts are the inerrant Word of God."

The original Greek and Hebrew manuscripts are gone!

So where is The Bible?

In 1978, I heard my professor, Dr. McKay, tell us preacher boys in our Greek class [Pensacola Christian College] that the King James Bible has errors, and is not the most accurate translation of the Bible.

MY PROFESSOR NEVER DID PROVE TO US THAT THERE WERE ERRORS IN THE A.V. 1611 BIBLE, OR ANY OF ITS EDITIONS!

Reject the unbelief of the SCHOLARS and their destructive higher criticism every time in favor of the A.V. 1611 BIBLE, OR ANY OF ITS EDITIONS!

"And he marvelled because of their unbelief." [Mark 6:6a]

Two liberal papist scholars of the eighteenth century [Westcott and Hort] did more damage to "conservative" Christianity than any other in the last 150 years. The blind are leading the blind over the precipice of unbelief! "It is almost universally affirmed by modern scholarship that Hort's greatest and enduring achievement was to dethrone or "kill" the Textus Receptus or the "Byzantine" Text." [True Or False, David Otis Fuller, page 225]

"Drs. Westcott and Hort have, in fact, outstripped their predecessors in this singular race. Their absolute contempt for the Traditional Text, their superstitious veneration of a few ancient documents [which documents, however, they freely confess are not more ancient than the 'Traditional Text' which they despise] knows no bounds." [True Or False, David Otis Fuller, page 180]

At the age 23, Hort wrote: "I had no idea till the last few weeks of the importance of texts, having read so little Greek Testament, and dragged on with the villainous Textus Receptus....Think of that vile Textus Receptus...." [True Or False, David Otis Fuller, page 225]

Since 1881, the Bible translation committees have managed to "revise" the English Bible over 200 times! The King James Bible has 31,101 verses, and they saw fit to revise over 31,000 of them.

For more references see Problem Texts, Peter S. Ruckman, page 12, 179; also see The Revision Revised, by John William Burgon; and New Age Bible Versions by G.A. Riplinger for the background for all this.]

Remember Rule Number ONE! In the 21st century, believing the BIBLE is GOD's WORD is not meant to be in reference to any Greek or Hebrew manuscripts, or even to the original autographs, but it does mean believing that in the English language God has preserved inerrant His word.
This word is the Authorized Version of 1611 [or any edition thereof].

"All scripture is given by inspiration of God, and is profitable for doctrine, for reproof, for correction, for instruction in righteousness: That the man of God may be perfect, throughly furnished unto all good works." [2 Timothy 3:16-17].


God has given to us a perfect BOOK with his “pure words”that have been “purified seven times”. Furthermore, this BOOK came through the Jews. “Much every way: chiefly, because that unto them [THE JEWS] were committed the oracles of God.” [Romans 3:2] And again: “The words of the Lord are pure words: as silver tried in a furnace of earth, purified seven times.”

Here are the seven purifications [or translations] in the English to the English-speaking nations on this Earth:

This seventh book represents a purified BOOK, and is the word of God in the English language. Therefore, we have this promise from God concerning these “pure words.” “Thou shalt keep them, O Lord, thou shalt preserve them from this generation for ever.” [Psalm 12:6-7] “For ever, O Lord, thy word is settled in heaven.” [Psalm 119:89]

Next: Faith And Hearing