Our forefathers believed that religion and morality could not be divorced from politics.

The Salient Points In American History 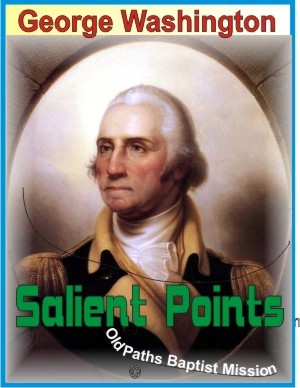 From Our Foundation till now!

We learn from History That Men Never Learn From History!

•The very first book to be printed in the United States was The New England Primer, and it was used in our public schools for 200 years thereafter.

•John Quincy Adams was our sixth President, who studied as a boy in the Primer, referred to the "insoluble bond" between Christianity and our form of government.

•The Supreme Court said we must "select and prefer" Christians for our elected rulers (or officials).

•Our forefathers believed that religion and morality could not be divorced from politics.

•The House Judiciary Committee Report (March 27,1854) said of the adoption of the Constitution and its amendments that "the universal sentiment (of our founding fathers) was that Christianity should be encouraged."

•Two months later, the House Judiciary Committee Report said: "The great and conservative element in our system ... the thing that holds our system together is the belief of our people in the pure doctrines and the divine truths of the Gospel of Jesus Christ."

•Our forefathers wanted to keep Christian principles in our government.

•Blackstone's Commentaries On Law are Bible based and were used by our Supreme Court for guidance for over 150 years of our nation's history.

•The branches of Government: The Legislative, the Executive and the Judicial branches, have their roots in the Scripture. (Isaiah 33:2).

•In 1844, The Supreme Court, in Vidal Vs. Girard, affirmed that our public schools will teach that Christianity is our nation's foundation.

•In 1892, the Supreme Court decision in Church Of The Holy Trinity Vs. United States stated that, "We are emphatically a Christian nation.

•From our nation’s birth right up to 1947, our Supreme Court had steadfastly maintained that the intent of our "founding fathers" was for our nation to preserve its Christian principles in order to perpetuate its existence as a nation.

•In 1947, the Supreme Court, in Everson v. Board of Education, totally pulled out of context Thomas Jefferson's reference to a "wall of separation between church and state" in his letter to the Danbury Baptist Association of January 1, 1802. The letter was to express to the Danbury Baptist Association that there was nothing to fear with respect to the federal government establishing a national church (or a national denomination). The 1947 decision, in essence, declared that we were no longer a Christian nation. Ever since then, the Supreme Court has over and over used this phrase "separation of church and state" to remove Jesus Christ out of our government and out of our public schools.

•The Supreme Court, in Engel v. Vitale, decided to strike out against school prayer (June 25,1962). The goal simply was to get God out of our public schools.

•On June 17, 1963, in Abington v. Schempp and Murray v. Curlett, the Supreme Court outlawed Bible reading in the public schools (without regard to any historical or legal precedent). In this decision, "Bible reading" was considered psychologically damaging. Downward we go!

•With Dekalb v. DeSpain (1967) the decision was to not allow the "Ten Commandments" to be posted in the public schools of our land. Children would not get to see "The Ten Commandments" posted on the wall of the school telling them not to lie, cheat or steal! Those "wooly-headed, bleeding-heart, knee-jerking Liberals" saw to that!

•And if that was not enough, in 1980, with "Stone v. Graham", the Supreme Court decided that the word of God could not even be mentioned in a public school. This was a long, long way from our beginnings as a nation.

•The removal of the Ten Commandments from the Alabama Supreme Court building (in opposition to the wishes of its Chief Justice) makes our divorcement from GOD FINAL. Our laws stand today are in direct opposition to God's moral laws. America's Christian foundation is destroyed! The "insoluble bond" between Christianity and our form of government is now dissolved to our hurt and ruination.


Next: The United States Constitution