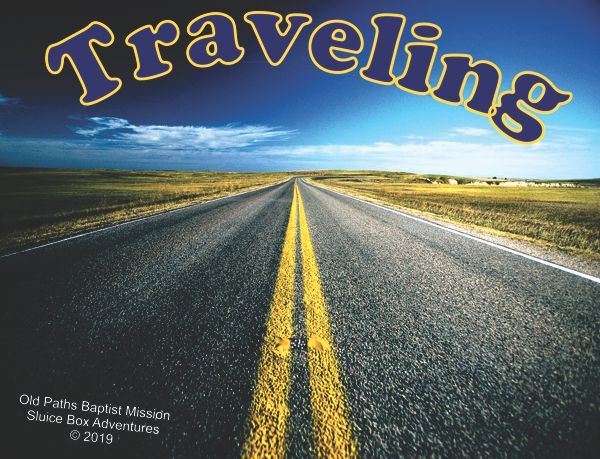 Now turn to the gospel of Luke, chapter twenty-four, and let’s read verse thirteen: “And, behold, two of them went that same day to a village called Emmaus, which was from Jerusalem about threescore furlongs.” [Luke 24:13]

Notice: These two disciples of Jesus Christ were traveling.

The men of this world are traveling on in their ways.

Is not that the truth?

We are all going somewhere.

We are in motion … till we die.

And while we are traveling it would be good for us to muse and to reason things out in our own hearts concerning this matter of salvation, and what really happened the day when the Son of God went to the cross of Calvary [and when he rose from the grave three days later], in similitude to these two disciples as they traveled down the road to Emmaus.

And yes, it would be good to have our hearts burn within us too, [REPROVE John 16:8] even as the hearts of these two disciples of Jesus Christ did that day: “And they said one to another, Did not our heart burn within us, while he talked with us by the way, and while he opened to us the scriptures?” [Luke 24:32].

The Spirit of God will open the words of God to us.

Now note: The burning within the heart is the result of the work of the Holy Ghost contending with man concerning TRUTH and SALVATION. “And when he is come, he will reprove the world of sin, and of righteousness, and of judgment:” [John 16:8]

However, there is someone else on the scene in the road of life, who travels with us and who schemes to steal from us the very words of life given by God.

This person wants to keep us distracted and keep us from musing or considering our need to get saved from the coming judgment.

This someone who prefers to lurk privily [in the background] in order to contrive his evil plan is someone who needs to be exposed [Proverbs 1:11].

And something else: This someone is one who loves to work within the mist of darkness as a cover for his covert operations [2 Peter 2:17].

Here is a warning for you, my friend: Watch out for those who operate under the cover of the mist of darkness.

In New England in the years before the "War Between the States" [1861-65] this someone was commonly called Old Scratch.

This Old Scratch is the same person who presented himself along with the sons of God in the days of Job “a perfect and an upright man”.

Now, Old Scratch has many names, one of which is “Satan”.

And for that, we must turn to the book of Job, [which is the oldest book in the BIBLE] to chapter one, verse six: “Now there was a day when the sons of God came to present themselves before the LORD, and Satan came also among them.” [Job 1:6]

There he is, Satan [Old Scratch], always hanging around looking for opportunity to get in on the action of trapping a soul of a man in an old black box.

The souls of men are his merchandise.

The Devil does not consider you a PERSON!!!

You are just merchandise!

Contrariwise, you are a person who needs the PERSON!

Now, for verse seven: “And the LORD said unto Satan, Whence comest thou? Then Satan answered the LORD, and said, From going to and fro in the earth, and from walking up and down in it.”

Note: Satan has a habit of going to and fro in the earth. He travels. He is always walking up and down in it.

You might say Old Scratch is a traveling kind of person.

In the mist of darkness, undetected and moving about in his travels, he finds men of like mind to do his bidding.

Now, men [all of us] have minds that are alienated from God.

Do you doubt me?

See this very truth for yourself in the BIBLE: Go to the Epistle of Paul the Apostle to the Ephesians, to chapter four, and verse eighteen: “Having the understanding darkened, being alienated from the life of God through the ignorance that is in them, because of the blindness of their heart:” [Ephesians 4:18].

We, from our birth, are alienated from God!

The Epistle of Paul the Apostle to the Colossians repeats this truth: “And you, that were sometime alienated and enemies in your mind by wicked works, yet now hath he reconciled.”
[Colossians 1:21]

This alienation from God in the hearts of men makes these men the perfect candidates to become the minions of the DEVIL [Old Scratch].

Old Scratch then schools these men to become the radical scoffers of things of God [the words of God] and the scoffers of promise of the return of Jesus Christ to set up his one thousand year kingdom on this earth.

Thus, we have here the warning by the Holy Ghost in the Second Epistle General of Peter, chapter three, verses three and four: “Knowing this first, that there shall come in the last days scoffers, walking after their own lusts, And saying, Where is the promise of his coming? for since the fathers fell asleep, all things continue as they were from the beginning of the creation.” [2 Peter 3:3-4]

Scoffers beware! There is a PERSON in heaven that will have you scoffers in derision. “He that sitteth in the heavens shall laugh: the Lord shall have them in derision.” [Psalm 2:4]

We have now arrived!

These are the last days.

Men today mock the things that are good, pure, or right.

They deride the things of God.

They hold the BOOK of God [the BIBLE] in utter contempt.

Onward they travel and all the while they are scoffing at the veracity of the return of Jesus Christ from his travel to the far country.

Oh yes, little do they know about what soon is going to happen.

Now what of this far country?

Better yet, where is this far country?

This far country is a place located “on the sides of the north”, where there is the city of a great King, which city is “above the stars of God”.

[THIS IS THE THIRD HEAVEN.]

[See for yourself this great truth which is in the book of Psalms, psalm forty-eight, verse two, and in the book of Isaiah, chapter fourteen, verse thirteen.]

Jesus Christ is in the far country while all the world mocks on!

The men of this world are traveling on their way, laughing, frolicking, and playing in the streets, and just having a gay old time.

Yes, they are on an easy road, but what are the consequences?

Look at their end for yourself.

Why, the easy road always leads to destruction!

It leads to the loss of the souls of men!

The Son of God told us this thing is true in the Gospel according to Matthew, chapter seven. Read it for yourself, see verses thirteen and fourteen: “Enter ye in at the strait gate: for wide is the gate, and broad is the way, that leadeth to destruction, and many there be which go in thereat: Because strait is the gate, and narrow is the way, which leadeth unto life, and few there be that find it.” [Matthew 7:13-14]

Let me make it really personal to you.

We are all heading to our long home.

Yes, your ultimate and final destination that will be set forever and ever as your end – your long home.

You will need to pay the piper, as someone would say, and call it quits at some set point.

It will be, as it says it will be, in the book of Ecclesiastes, chapter twelve, verse five: “Also when they shall be afraid of that which is high, and fears shall be in the way, and the almond tree shall flourish, and the grasshopper shall be a burden, and desire shall fail: because man goeth to his long home, and the mourners go about the streets:” [Ecclesiastes 12:5]

If men will only learn how to get eternal life.

I say it again: If men will only learn how to get eternal life!

It’s not through religion.

It’s not through works.

Yes, if only they will learn that the path to eternal life is through faith in a person!

Furthermore, they need to learn this, even while this person is physically absent from the earth, and is in a far country traveling WHO will return.

Three times in three different accounts of the Gospel of Jesus Christ we see this PERSON is traveling to a far country, and while he is traveling, he has left the stewardship of his vineyard in the care of “husbandmen”.

Next  3. The Sacrifice in Bozrah